The Last Walk by Cory G


The author has placed a warning on this post for violence. 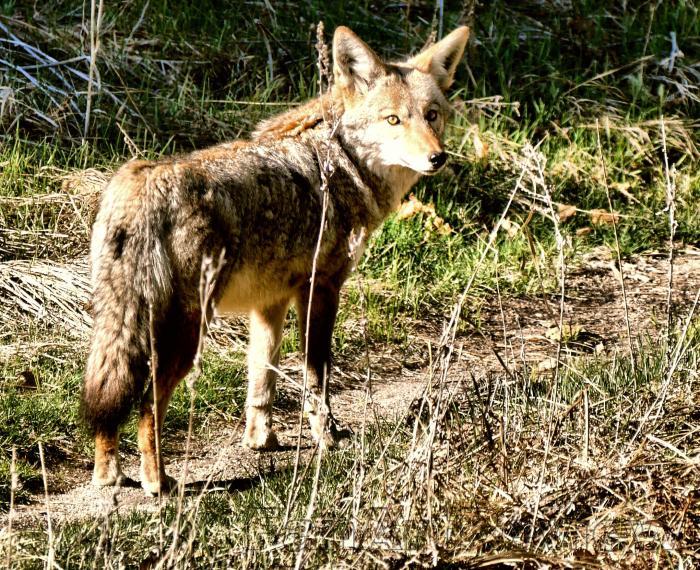 It was Saturday. Joe Donovan got up before dawn, as he always had from a lifetime of living on a farm. He fed Louise, their Bichon Shih Tzu, and made a pot of coffee. Then he let her outside to do her business. Such a funny thing to have a little dog that sleeps and eats in the house, he always thought. Before Louise, they always had Labrador Retrievers but they were big outside dogs. Mary gave Louise to Joe after Shelby, their last Retriever, had been put down two years ago. Joe didn’t farm anymore, sold his land and cattle when it became too much for him and he decided to retire, so Mary thought a little dog at Joe’s side would be just the thing for him. At first Joe didn’t think too much of Louise. He said to Mary,“You call that a dog? It’s smaller than the barn cats that run wild around here.” But it didn’t take long for Joe to fall in love with that tiny fluff of white fur. Louise followed Joe  around everywhere and he tended to her needs, often before his own.

Joe waited on the front porch for Louise to be done piddling. She came bounding up the porch steps and jumped on Joe’s leg, waiting for a tiny scrap of meat he always gave her after she’d been a ‘good girl’.

“It’s going to be a beautiful day, Louise,” Joe said, patting her on the head after she gobbled up the meat in one bite. “Just wait until the sun comes up, then we’ll go for a walk.”

At the word ‘walk’, Louise’s ears pricked up. She loved to go for a walk with Joe. They always went first thing in the morning and later in the evening when the air cooled off. Joe and Louise walked back into the house, the sky started to change from black to an ominous gray. And in an hour it would be light enough to go.

“Time to go, girl,” Joe said, taking his last sip of coffee. He bent down to put on his shoes and called out to his wife. “Bye, Mary. Taking the dog out for a walk. Be back soon.”

There was no reply. Mary was still sleeping, she was one of those night owls who stayed up knitting or reading those romance novels she liked so much until the early hours of the morning. And that was okay with Joe, he liked his quiet time in the mornings, just as he supposed she enjoyed her peaceful evenings without him pestering her.

The screen door creaked on its hinges, then slammed behind them as they walked down the front porch steps, across the farmyard, and down the path by the canal where they always walked. The air was a bit chilly first thing but in no time it would be too warm for a coat, so Joe chose not to wear one for the nuisance of having to carry it later. Louise began sniffing around and walking ahead of Joe. She knew where to go and she never got too far ahead of him. When she did, she’d stop, look back, and wait for him to catch up. The sunrise was a swirl of peaches and purples in the low clouds on the horizon. Red-winged blackbirds sang their songs perched high on the cattails growing along the edges of the canal and dew glistened on the grass all around them. The water in the canal flowed softly, barely making a sound.

“Slow down, girl. Give an old man a chance to catch up,” he said. For the first time that Joe could remember, his faithful dog didn’t stop and look back at him. Instead she began running faster and even further away until he couldn’t see her anymore down the side of the canal in the tall weeds, and soon he’d discover the reason why, but not before he heard a frantic bark followed by a piercing squeal he’d never heard her make before.

Joe’s heart began to beat hard against his chest and he started to run. He feared the worst but called out to her anyway. “Louise! Louise! Come back here, girl. Come to Joe!” But Louise didn’t come. By the time he caught up to her it was too late. There in the tall grass along the side of the canal was a coyote with Louise dangling from its jaws, bright blood dripping down her snow white coat. Her neck was broken but she was still alive, whimpering through short, laboured breaths. Her deep brown eyes looked at Joe, scared, pleading for help, yet still full of love.

Joe yelled at the coyote, “Let her go! Let her go you damn mutt!” Joe rushed toward it, his face flushed, and tears streaming from his eyes. He knew she would be dead soon, his heart felt like a heavy weight in his chest. Joe picked up a rock, threw it at the coyote, and missed. The coyote didn’t budge. It stared at him with unwavering eyes. As Joe bent down to pick up another rock, he was filled with a strange sensation that it wasn’t just the three of them out here. He stood up slowly and turned around. There, surrounding him were more coyotes, a pack of them, maybe ten. In all his years on the farm, he’d never encountered a situation like this. He’d often hear the coyotes howling in the middle of the night in a distant field, and sometimes he’d see one or two in the broad daylight, but never, never, had he seen a pack like this. They were all around him. One started yipping and another, the biggest one, took a few steps closer toward Joe.

They’re going to attack me. Is this for real? This isn’t happening. But he knew it was. His mind was racing and his whole body trembled. Joe knew he had to run, what else could he do?

Joe backed slowly up the side of the canal. His arms stretched out and palms open in surrender.

“Whoa, now. Whoaaaaa,” Joe quivered. He watched as the coyote dropped Louise from its bloody mouth. She was dead now and Joe’s heart broke even more. “Nooooooooo! No, no, no, no, nooo!” A flood of fresh tears filled his eyes and washed down his cheeks. Through blurry eyes he suddenly broke out in a run, as fast as his old legs would carry him back down the canal path.

In a matter of seconds the pack, barking and yipping, caught up to him. The biggest one bit  his heel and tripped him up. Joe went flying, face first, onto the ground below. He tried to scramble to his feet but he was too slow. All the coyotes were on him now, snarling, teeth bared, and creeping toward him. Joe started to scream for Mary but it was no use. She was probably still sleeping and he was too far away for her to hear his cries. The mangy dogs started to bite at him, first at his hands and his face, and Joe tried to slap and push them away, but they just kept coming. Blood sprang up from the punctures in his flesh and he screamed out again in pain. Then the biggest one went straight for his guts. He gnawed and chewed and pulled until long ropes of his innards were being strewn out of him. Joe never felt such pain in his life, a deep, burning rage in the pit of his belly. Still, Joe tried to stop the coyotes by screaming and spitting at them, because he could do no more.

Before everything went black and cold and stiff,  Joe whispered, “I’m sorry, Louise. I’m so, so, sorry.”


© Copyright 2020. Cory G All rights reserved.
Cory G has granted FanStory.com, its affiliates and its syndicates non-exclusive rights to display this work.
Advertise With Us
Successful Operation
50-word Dribble.

Pays: 10 points. and 72 member cents
Copyright © 2000 - 2020 FanStory.com. All rights reserved. Terms under which this service is provided to you. Our privacy statement.
top
You Have No Rank
Share 4 posts to be ranked.