The world is a stage

Story of the Month Contest Winner 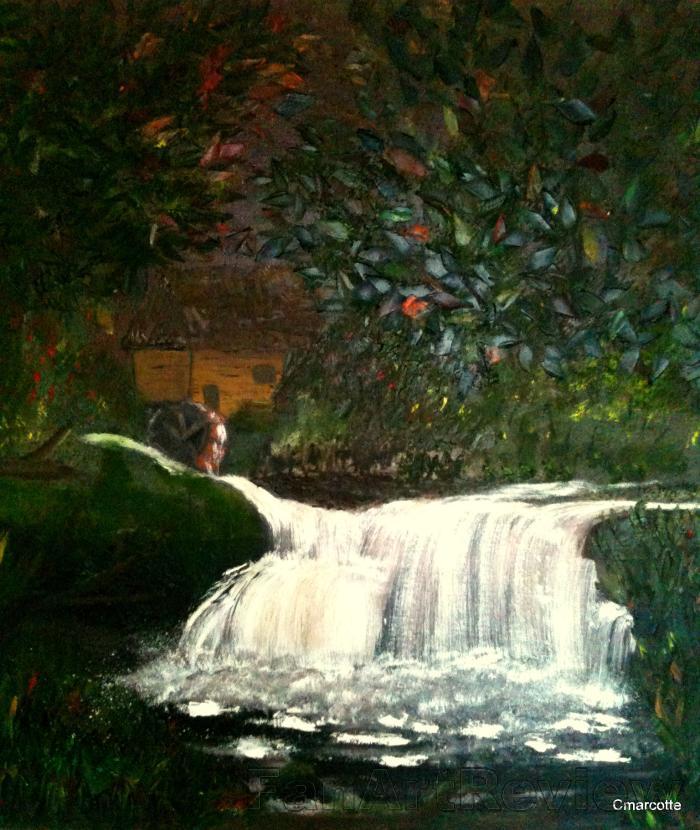 I am sitting across from my daughter in the kitchen of our favorite retreat, a mountainside cabin I bought three summers ago. It's ensconced in a circle of lush pines and just a five-minute walk to a deep, wide lake as blue as cornflowers. The nearest town is a good ten miles away, exactly how we like it on these mother-daughter bonding excursions that we take three or four times a year.

As Lila talks, I respond with warmth and animation that are less than sincere because I now know that my child, this smart and pretty dark-haired over-achiever before me, is also a dangerous sociopath. The web of her lies is so dense that their filaments could produce a flawless lace tablecloth the size of a football field.

For two more days, until we return to the city, I will act both engaged in her charm and oblivious to what I know is the awful truth: She's stowed at least four bodies on the far side of a lake in a culvert she covered, like a mass grave, with fronds and branches from the nearby vegetation.

I've surmised that this is the work of my daughter rather than some crazed psychopath rooting around in these woods because one body is, even with decay, still intact enough for me to recognize. He's the stockbroker she brought home two weekends ago and whom she said, through tears the next day, was moving to England. Another cadaver is a fresh kill: the waitress with whose services Lila was dissatisfied less than twenty-four hours ago.

To my advantage, I make my living in the creative and performing arts, which means that I excel in taking on the role of a character foreign to my nature. I have, in fact, received many awards for it throughout my thirty-five years in the business. On Sunday, when Lila will return us home--her to her apartment in the city, me to our family house two suburbs beyond--then I can feel the rush of emotions that, for the sake of self-preservation, I am compartmentalizing right now: fear, horror, disbelief, betrayal, rage, and shame. I have obviously taught her well how to be a chameleon, for she has fooled us all beyond belief. Right now, in fact, she is talking about her childhood fear of rats and mice while two miles from our cabin is the detritus of her unthinkable acts.

To my disadvantage, cell service doesn't extend this far into the wilderness, and Lila is fit, athletic, and twenty-five years my junior. Never could I outrun or overpower her. So my only protection is my ability to beat her at her own craft: acting as if everything is fine and Brady Bunch normal when I know excruciatingly well that it couldn't be sicker. One slip, and I'll be Body No. five --at best, an episode of 48 Hours, at worst, a Lifetime Movie Channel feature.

This will have to be the performance of my life and more. It will be the ultimate game of chess.

#
As always on our first night in the cabin, I prepare her favorite meal ---roast chicken with sweet potatoes and a cucumber-and-tomato salad---
then challenge her to a game of Scrabble. We laugh and cajole each other with every new word on the board, and I remind her of the first time she beat me. "It wasn't until I was sixteen, though," she remarks with a teasing, rueful pout on her face.

"Yes," I concede. "But you knew it was a genuine victory because I've never believed in just letting children win."

"I'm going to do that, too, when I have children," she muses, and I give her a doting smile as my stomach leaks acid into my throat.

"Isn't it time for marshmallows in the fire pit?" I tease like a whiney child.

"Nooooo," Lila admonishes like a strict mother. "We save that for our last night." She then switches gears in a way that concerns me. "Want to go out and dangle our feet in the lake?

"At night?" I squawk. "Are you kidding? Lila Maynard, you know that once it's dark, I venture no farther than the fire pit on the back deck. Don't you remember our first time here when we made the mistake of shining our headlights into the dark? All those wolves came running out from the woods and started to circle the truck! And then farther out, we could see about three hundred more pairs of yellow eyes glowing back at us."

"It was the headlights that brought them out," Lila says with some exasperation in her tone.

Then, with a finality and edginess to her voice, she says, "Well, I'm going," and I am unnerved but still offer up a protest.

"Sweetie, no," I coo, my character full of maternal concern for her, as I would have had, myself, were I not aware of what's decomposing in the woods.

"I said I'm going," Lila snaps with an irascibility and impatience to her tone, and I know this dialogue is over. For whatever reason ---to admire her cache again, perhaps, or maybe just to check that it remains undisturbed-- she needs to venture out to her quarry.

"Take the extra flashlight, at least," I say with the perfect combination of caring and resignation, and she obliges without a backward glance.

As the door closes, I see her keys lying on the table, and an electric current encircles each of my vertebrae and, one by one, ignites the hairs on the back of my neck. This is a test. Her instinct has sensed what I know.

I pad to the living room and pretend to be absorbed in my book while, in fact, all my senses are on their highest alert. Will she be sneaking around to the back deck to overtake me if I try to drive to safety? Or is she already lying in wait for me in the van? My continuing to lie on this couch, turning pages in a book on which I couldn't possibly be concentrating, is my only chance of living through the night with my child. I will give it thirty minutes then open a window and call out to her, to make her hear how I am growing concerned for her safety.

Bullfrogs from the lake and crickets in surround-sound combine in an eerie, unsettling orchestration, magnified by the amphitheater they call home. But it's when they stop in unison that my terror is magnified. Exponentially, in fact, because I sense what's causing it. Yet my lifetime of training in the theater recognizes a cue when one presents itself to me, and this one is deafening in its silence.

A mother's instinct would be kicking in, and so I take the stage in case a career-ending critic is lurking in the wings.

I spring to a sitting position then lean forward, giving a slow turn of my head, brows and eyes at their furtive best. I lay my book on the arm of our couch and give both the appearance and the reality of listening. I steal on crouching legs to the front window for effect, since that is the direction my child went when she left. If she is peering in through the back window, this will look like the act of an oblivious, concerned mother.

I call out with a high, tight tone that doesn't require a lot of acting to effectuate.

Louder this time, and with a quaver, I make it sound as if I'm panicking. Again, there is little acting needed. "Lila? Lila! Please answer me. Sweetie, please. Are....you....okay?"

"Mommy?" Lila's voice rasps out from what I sense is the edge of the pine trees.

"What is it, Sweetie? Are you hurt?" My heart pounds so hard in my ears, I have trouble hearing anything.

"Mommy, please help me," she implores.

"Honey, I will help, but I can't see you. Turn your flashlights on."

"Oh, Lila, please Sweetie; I can't see you to know where to come and help you." Prickles of terror are stabbing the entire surface of my head. I begin to sweat.

"I'm too scared to do that, Mommy," she says with the voice of a child. And then, through the nightmare-black air, I can hear her whimpering.

A long beat hangs in the smothering air before I see two wide circles of halogen light arc out from my daughter's hands and into the molten eyes of the wolf pack that surrounds her.

The lights hypnotize the ones positioned at three and nine, but they send the other ten into attack mode. Lila screams and screams and screams, an operatic obligato to the low, guttural snaps and growls that encircle her. And then the screaming stops, and even from this distance, the sound of a feeding frenzy is unmistakable.

I return to the livingroom and start a fire, and, while it begins to swell, I make my way to the kitchen for a bag of marshmallows.

It's been said that you never REALLY know anyone; all you know is what they let you see.
Pays one point and 2 member cents.


© Copyright 2020. Rachelle Allen All rights reserved.
Rachelle Allen has granted FanStory.com, its affiliates and its syndicates non-exclusive rights to display this work.