I taught English for 40 years on the high school and college level. Since retiring, I have written a poetry collection titled "Reflections of a Dog Walker," and five novels, all unpublished. I mostly post poems and short stories.

He is an accomplished poet and is currently at the #56 spot on the rankings.

He is also an active reviewer and is holding the #60 spot on the top ranked reviewer list. 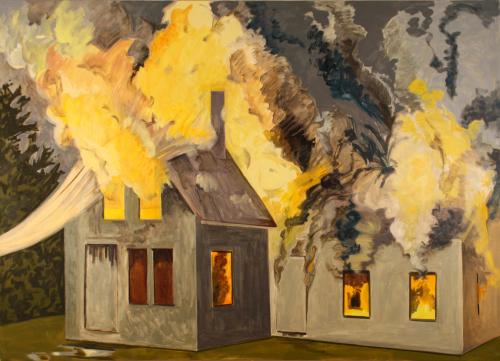 "Those yellow coveralls. You ever take them off, Ox?" asked Father Joe.

Farber shared all the bulk of the ladder truck he drove. Everyone who knew him well--especially the boys at Station 2--called him "Ox."

"I'm on call, but didn't want to miss Mass. Might not get another chance. The fires we've fought lately have been infernos. Took hours to put each out."

The old priest grinned. "Not getting much sleep either, are you? You look like forgotten laundry."

"She won't forgive Him, Father. Refuses to come here or pray. Just cries."

The priest nodded knowingly. "Is she home alone?"

"Don't understand your being gone all day, most nights." Father Joe smiled grimly. "Scold you with their eyes, don't they?"

"You really need to take some time off, Ox."

Farber groaned. "Can't, Father. Fire inspectors think the last two fires were set by a serial arsonist on the rampage. Every station in DuPre County is on alert, all leaves cancelled."

Father Joe shook his head. "Does Susan watch TV? Scary news like that would be on every channel."

"She knows what I do, Father, and has lived with fear just like cops' wives. But she won't watch the news, even with me. And since the baby's death she--she's barely spoken, just weeps or shivers in my arms in bed."

Father Joe grasped the fireman's hand. "Come into the nave with me, Ox, while it's empty. We'll pray together."

The priest led Farber toward the chancel. In front of the first pew they genuflected, then sat, their hands steepled. Moments later they murmured the Lord's Prayer in unison.
*. *. *

Late Sunday evening, Station 2 received an alarm and rolled out all its engines to an industrial park on Oakdale's southern fringe. Flames leaped from the roof and windows of a huge storage center. Three teams with hoses and axes wore masks as they charged into the inferno, hoping to extract trapped employees.
*. *. *

On Tuesday, Father Joe watched the late evening news in the rectory.
A reporter spoke solemnly as the camera zoomed in on a parade of fire engines passing before Oakdale's Station 2.

"--two dozen or more trucks bumper-to-bumper from all over DuPre County. These firemen are paying tribute to one of their brethren, Wes Farber, who lost his life while rescuing six workers. A community is grateful to this hero for what he did."

As tears streamed down his cheeks, the priest prayed for Susan.


Artwork is courtesy of Google images.


© Copyright 2020. RodG All rights reserved.
RodG has granted FanStory.com, its affiliates and its syndicates non-exclusive rights to display this work.