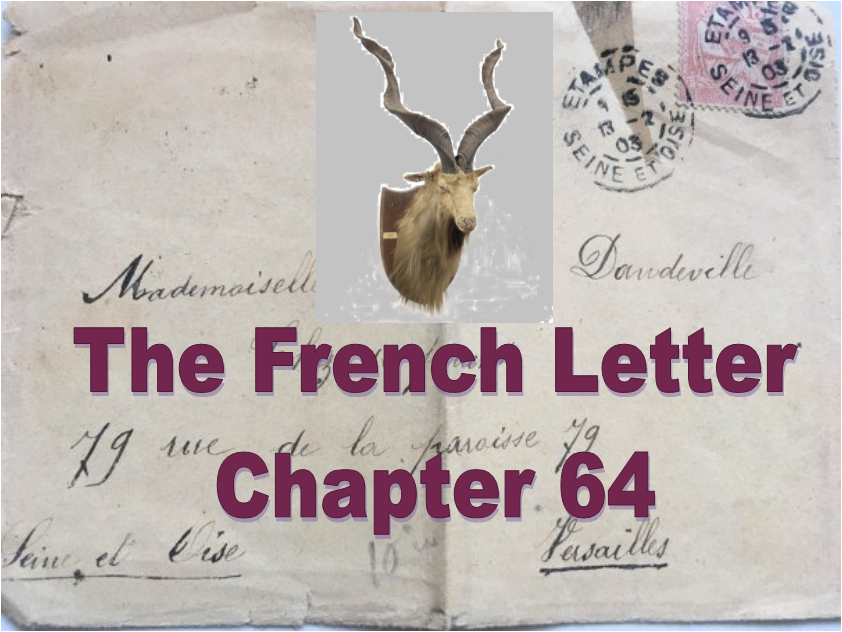 Helen half rose, offering her hand. "Lovely to meet you, Ian. Charles has told me so much about you."

"Call me Bisto, my dear. All my friends do."

Bisto blushed and turned to me. "What a charming lady. Far too good for you, Charles."

Chapter 64
I brought a third chair to the table and put my arm around his shoulder, drawing him into a close embrace for a few seconds.

"Terribly sorry, old chap. I know how much Jenny meant to you. You must be devastated. Words don't mean much at a time like this, but we're here to do anything we can to help."

Before sitting down, he fumbled in his pocket for a handkerchief and, turning to one side, wiped his nose. "Autumn sniffles, I'm afraid. Blasted nuisance." Neither of us said anything.

Biggles wasn't fooled, either. As soon as Bisto sat down, the spaniel came across and rested his head on his master's knee. An awkward silence was broken by Joe appearing with the menus.

Bisto smiled with relief, took them, and passed one to each of us. "What'll you both have? On me," he added. "I insist. They do jolly good steak burgers here, home-made."

"Of course, my dear. Silly of me. You gals are forever watching your weight, aren't you?" He shuffled with embarrassment at the faux pas. "Not that you need to, of course. You look perfectly lovely as you are."

He glanced at me for approval. "Always putting my foot in it, I'm afraid. Now, how about another pint to go with the meal? Or would you prefer a bottle of plonk. The house red's pretty good."

Knowing Bisto's idea of 'pretty good', I butted in. "Let me get the bottle, Ian. Least I can do." Having taken the order, Joe said he'd return with a wine list shortly.

"Not to worry. I'll come over." I needed to see a man about a horse, and this was as good an excuse as any, so I followed Joe back to the bar. After a brief consultation, I ordered a bottle of Grenache, a wine that would sit well with the burgers and be light enough to go with Helen's omelette.

When I returned, I found Helen and Bisto deep in conversation. They were talking of Chitral, of all places. It turned out that Bisto's great grandfather had served in the Indian Army and had been one of the relief party that lifted the Siege of Chitral in 1895. Always an enthusiast for family history, he was telling her about it in exhaustive detail.

"An astounding feat, a 28-day forced march through snow-covered mountains, across the Shandur Pass. All the way from the garrison at Gilgit, more than 200 miles east."

"Across the Shandur Pass? Really? That's amazing!" Helen did her best to look impressed.

"Yes, the air's pretty thin up there. They'd have had their work cut out. Not to mention the bloody Kafirs taking pot-shots at them from hidden vantage points."

"Not at all." Helen recovered herself enough to let it pass. "The British imperialists of the time referred to the Kalash as Black Kafirs and considered us primitive savages. Primitive we may have been, but a proud and ancient people."

She turned to me with a sweet smile. "We also treat our women with respect. If you have no objection, I'd prefer a Prosecco with my omelette."

"I'm sorry," I said. "I should have asked." When Joe turned up with the Grenache, I told him we'd changed our minds. "Could we have a Prosecco for the lady and -" I paused to wink at Bisto, "a carafe of the house red for the two old boors."

Helen kicked me under the table. "I didn't change my mind."

She resumed her conversation with Ian, "Your grandfather would have been mistaken. Those snipers must have been Pathans under the command of Chitral's Islamic ruler, the Mehter, who was as much our enemy as theirs."

Bisto breathed a sigh of relief. "I'm delighted to hear we were both on the same side, my dear. I'd hate to think my forebears had been at war with yours."

We passed the rest of the meal in small talk, avoiding any mention of the elephant in the room. When it was time to leave, Helen and I piled into the back of the car, snuggling close together against the cool night air. Biggles lay on the front seat with his head in Bisto's lap. Shortly after we arrived at The Willows, Helen supressed a theatrical yawn and declared her intention to have an early night.

"You two have probably got lots to catch up on. Men's talk. I should only be playing gooseberry."

I gave her a brief kiss. "All right, then. See you later."

As soon as she was safely upstairs, Bisto and I retired to the library. He produced a decanter of port and offered me a cigar, which I declined.

"Filthy habit," he said, as he helped himself to one and sank into a leather armchair by the fire. He tried, without success, to blow smoke rings over the curled horns of the trophy hanging above the fireplace.

"Yes, the old boy shot it on the slopes of Tirich Mir. A fine head, isn't it? He was dashed proud of it, I can tell you." He leaned forward to poke a bit more life out of the fire and to add another log. "I'm going to show it to Helen in the morning, along with some of his old photographs and his Chitral Relief Medal."

"If I were you, I'd stick to the medal and the photographs. The Kalash are the ancestral goatherds of Tirich Mir. They believe that markhors are protected by Peris, the faerie folk of the mountains. A curse would be levelled at anybody who shot one for sport."

"Really? I remember my grandfather spouting some tommyrot about mountain fairies. You don't mean to tell me that Helen believes in that rubbish?" He took a swig of port and refilled our glasses.

"Yes, she does - and I've half a mind to believe it myself."

Bisto was dumbfounded. "You're not serious, are you?"

"Serious enough to fly out there with Helen and see for myself." I stood up and warmed my back against the fire. "By the way, whatever became of your great grandfather?"

There was an uneasy silence, broken only by the hoot of an owl in the woods. Bisto gave me a strange look and said nothing.

Charles Brandon - the narrator, a well-known travel writer.
Group Captain Bamforth (alias Sir David Brockenhurst) - an intelligence officer with MI6 and Air Attache in Paris
Helen Culverson - Also a travel writer, whose relationship with Charles is complicated by her relationship with Jeanne Durand.
Kayla Culverson - her older sister, who disappeared somewhere in Bangkok and has surfaced again in Paris.
Madame Jeanne Durand - a French magazine editor and undercover agent with the French Drug Squad.
Madame Madeleine Bisset - Helen's landlady in Paris
Mr Bukhari - a Pakistani businessman (now deceased)
Ian 'Bisto' Kidman - an ex-RAF friend of Charles's.
Monsieur Bellini - a denizen of the French Underworld.
Andre (aka Scaramouche) - an actor in Montmartre and friend of Kayla's
Dr. Laurent - a veterinary surgeon in Versailles.
Father Pierre Lacroix - vicar of the Versailles Notre Dame church.
Madame Lefauvre - an old woman living in Versailles - the town gossip.
Alain Gaudin - brother of Francoise, a gardener at Monet's house in Giverney
Francoise Gaudin - Alain's an intellectually disabled sister.
Estelle Gaudin [deceased] - mother of Francoise and Alain, a prostitute
Mademoiselle Suzanne Gaudin [deceased] - Alain's grandmother, to whom the mysterious letter of 1903 was addressed.
Jack and Nancy Wilkins - a Wiltshire dairy farmer and his wife.
Colonel Neville Arnoux [deceased] - of whom we may hear more later.
Gaston Arnoux - Owner of an art gallery in Paris, recently assassinated by Charles Asserted to be leader of an ISIS network
Pays one point and 2 member cents.

tfawcus has granted FanStory.com, its affiliates and its syndicates non-exclusive rights to display this work.
Advertise With Us
What Will YA Do Wi' ME?
An old, smashed tin can seeks redemption.