Chapter 75: A deal is arranged 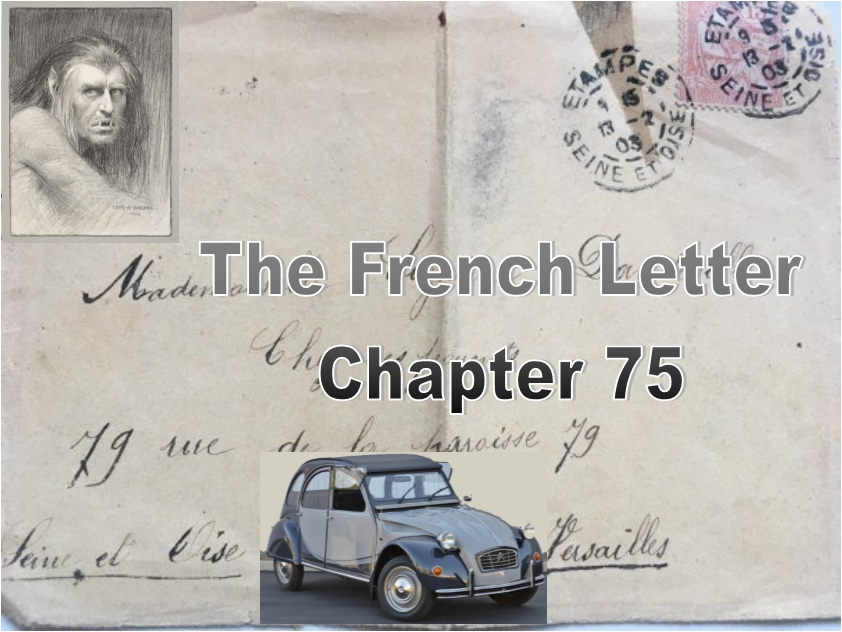 Helen reached over and passed him a tissue. "Would you trust me then?"

He wiped his eyes and blew his nose, making a noise like a foghorn. "Yes, I will trust the letter to you."

"In that case, I shall have to give you a small deposit against the final sale. An act of good faith. Would a thousand euros be acceptable?"

A vacuous grin spread across Alain's face as she added, rather unnecessarily in my opinion, "In my country, we seal such deals with a kiss."

It wasn't until much later that I understood what an act of betrayal that kiss represented. It was a lingering kiss followed by honeyed words. "You're a sweet man, Alain, to look after my sister, and I shall be forever in your debt."

The lascivious way in which he looked at Helen reminded me of Shakespeare's Caliban, an earthbound brute full of lust and loathing, but she appeared not to notice how he leered and fawned as she continued, "I shan't forget the trust you have shown in letting me borrow this letter of yours."

She took his hand and looked into his eyes. "There is just one more thing that needs to be done if I'm to act on your behalf to sell the painting. I shall need you to sign a letter authorising me as your agent. Are you willing to do that?"

I watched, fascinated, as he nodded. At that moment, I think he would have done anything for her. Whilst she drafted the letter, I slipped downstairs, hoping the concierge might be prepared to witness the signatures. When I knocked on his door, I was confronted by a balding man wearing half-rimmed glasses and a defeated air. He was more than willing to oblige. It was probably the most exciting thing he'd been asked to do all week.

Obtaining Alain's signature was a mere formality, but he paused as he passed the letter back to Helen. "This is between you and me. You understand? That man ..." he spat the words out at me, "has no part in our arrangement."

I had the feeling that he did this more to spite me than to please her. He seemed to take pleasure in driving a wedge between the two of us. I didn't like it. I didn't like it at all, but there was nothing I could do. We needed the letter and his authority to act. Was it jealousy making my gorge rise, or was it fear that Helen would end up double-crossing both of us? I wasn't sure.

I offered Alain my hand. "If that's the way you feel, I am sorry. I mean you no harm." The look he gave me made it clear that there was no chance of rapprochement. Harmonious relations between the two of us were out of the question.

With that, I left. I knew she would soon follow, so I strode up the hill towards Claude Charpentier Square, turned sharp right, and headed for Le Déli's Café. The table I chose, under the shade of the red awning, commanded a clear view back to the square and down the street leading to Sacré-Cœur and the funicular railway. I ordered a coffee and waited.

After ten minutes, I grew restless. After twenty minutes, anxious. I tried phoning, but her mobile either had a flat battery or she had switched it off. Surely, I couldn't have missed her? Perhaps it had been unwise to leave her with Alain in his present mood. Something was wrong. I drained my cup and pushed my chair back, almost hitting a Pekinese lying at the feet of her mistress.

"Look out, you great oaf! You almost squashed Mou-Mou."

"I'm so sorry, Madame. Please forgive me." If I'd been wearing a hat, I would have raised it.

She glowered with indignation and Mou-Mou strained at the leash, snarling, clearly intent on revenge. I retreated, heading back towards the square. The street was full of tourists browsing around bric-a-brac displays, clucking and clicking, poring over maps and pointing uncertainly, one way, then the other. I scanned every face, in the vain hope of finding Helen amongst them, but she was nowhere to be seen. What a fool I'd been.

I quickened my pace as I turned into Rue Cortot but, barely fifty yards from the door with the dragon knocker, I ducked sideways, melting in behind a group of tourists coming out of the Museé de Montmartre. I had spotted the now familiar figure of the MI6 stooge loitering alongside a grey Citroen, hands cupped over a match as he lit a cigarette. Clearly, the embassy was still keeping an eye on Kayla. This man was working overtime. The least they could do was to give him a decent car. The 2CV was almost a museum piece.

I was puzzled, for I was sure he hadn't been there when I left the apartment. There was nowhere to hide on this narrow lane, nor did he show any sign of wanting to. It was as if he wished the occupants of the apartment to know he was there.

I shrank back into the doorway of the museum, where I could still observe while scanning leaflets promoting the latest exhibition. Before long, Helen emerged, crossed over, and climbed into the 2CV. The embassy stooge ground his cigarette into the pavement and, after looking up and down the street, got in beside her and they drove off.

Had she summoned him? If so, her phone was working, and I could only conclude that she had been ignoring my calls. I was turning this over in my mind while I retraced my steps. As I passed Le Déli's, I noted with relief that the lady with the Pekinese was no longer there.

As always, the view from the balustrade in front of

Sacré-Cœur was stunning, with the late afternoon sun bathing the city in a soft glow. It reflected off the glass domes of the Grand Palais and bronzed the metallic framework of the Eiffel Tower. The Seine flowed through the landscape like a silver thread. I paused to savour the magic, wondering if I would ever experience it again.

As I rode down the funicular, I recalled my conversation with Madame Durand following the unfortunate incident with the gun in Helen's apartment. She had been at pains to point out the close alignment between her work with the Paris Drug Squad and Bamforth's operations against ISIS. Perhaps Helen was on her way to see Madame Durand. That seemed a more logical conclusion.

A few hundred yards before reaching my lodgings in Rue Gabrielle, my ruminations were interrupted by the ringtone on my mobile phone. It was the Air Attaché, Group Captain David Bamforth.

"Hello? Is that you, Brandon? Something's come up. I need you to report to the embassy right away."

Charles Brandon - the narrator, a well-known travel writer.
Group Captain Bamforth (alias Sir David Brockenhurst) - an intelligence officer with MI6 and Air Attache in Paris
Helen Culverson - Also a travel writer, whose relationship with Charles is complicated by her relationship with Jeanne Durand.
Kayla Culverson - her older sister, who disappeared somewhere in Bangkok and has surfaced again in Paris.
Madame Jeanne Durand - a French magazine editor and undercover agent with the French Drug Squad.
Madame Madeleine Bisset - Helen's landlady in Paris
Mr Bukhari - a Pakistani businessman (now deceased)
Ian 'Bisto' Kidman - an ex-RAF friend of Charles's.
Monsieur Bellini - a denizen of the French Underworld.
Andre (aka Scaramouche) - an actor in Montmartre and friend of Kayla's
Dr. Laurent - a veterinary surgeon in Versailles.
Father Pierre Lacroix - vicar of the Versailles Notre Dame church.
Madame Lefauvre - an old woman living in Versailles - the town gossip.
Alain Gaudin - brother of Francoise, a gardener at Monet's house in Giverney
Francoise Gaudin - Alain's intellectually disabled sister.
Estelle Gaudin [deceased] - mother of Francoise and Alain, a prostitute
Mademoiselle Suzanne Gaudin [deceased] - Alain's grandmother, to whom the mysterious letter of 1903 was addressed.
Jack and Nancy Wilkins - a Wiltshire dairy farmer and his wife.
Colonel Neville Arnoux [deceased] - of whom we may hear more later.
Gaston Arnoux - Owner of an art gallery in Paris, recently assassinated by Charles. Asserted to be leader of an ISIS network
Pays one point and 2 member cents.