The Snow Leopard by tfawcus

He is an accomplished novelist and is currently at the #4 spot on the rankings.

The Seal of Quality committee has rewarded him with 1 seals. He is also an active reviewer and is holding the #54 spot on the top ranked reviewer list.

Chapter 77: A final briefing before departure 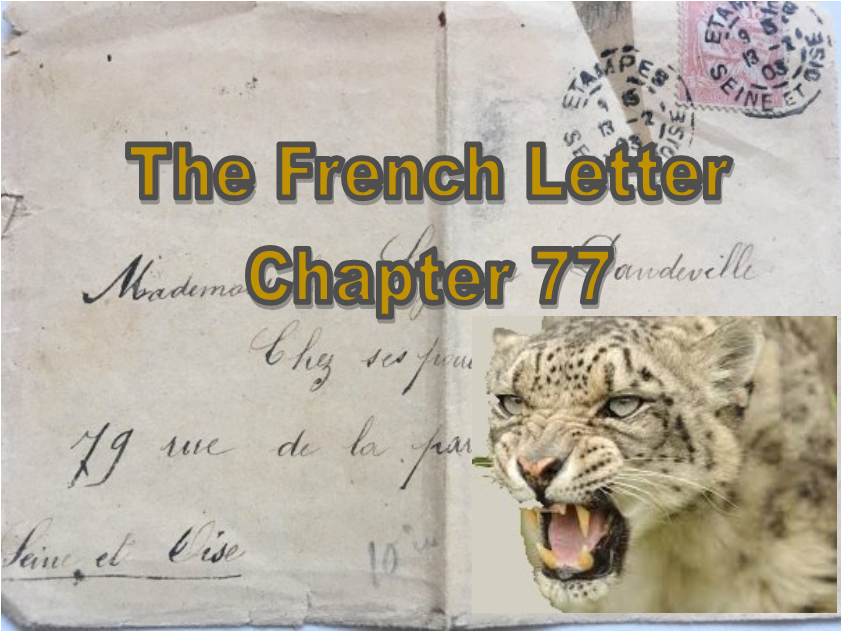 All faces were now turned towards me. Whether from a desire to serve my country, or (and this was more likely) from a misplaced sense of chivalry, I said, with an evenness of tone that belied my racing heart, "You can count on me, gentlemen."

As people pushed their chairs back and started to disperse, I was aware of a familiar scent wafting behind me and a soft, teasing whisper, "I rather hope that I can, too, darling."

The twinkle in her eye suggested that the next few weeks of my life were going to be lively. As I searched for a suitable response, a third figure joined us.

"Bonsoir, Monsieur Brandon. Things are not always as they seem, n'est-ce pas?" A dangerous smile played around Arnoux's lips as he continued, "It is easy to steal from a dead man but inconvenient when he comes back to life. Is that not so?"

"Just what are you accusing Charles of?" Helen's indignant tone made no impression on the man. He stared at her coldly before his features relaxed.

"I am accusing him of being a fool, mademoiselle. The painting he stole from my gallery cannot be sold, for it is mine. As soon as it turns up in an auction house, I shall reclaim it." He addressed his words exclusively to her, as if I were no longer there. "It would be better for him to return it now, of course, while only the three of us are aware that he is a common thief."

Extending finely manicured fingers, he took her hand with old world formality and pressed it to his lips, bowing slightly at the waist as he did so. "Enchanted to meet you, my dear." The ghost of his threat remained hovering in the air as he departed.

It took Bamforth's bluster to blow it aside. He was full of bonhomie as he approached us. "Jolly good show there, Charles. Well said! Well said, indeed! We'll make a hero of you yet."

He beckoned the sandy-haired young man across. "I'll leave it to Parsons to fill you in on the details. I believe he has you scheduled on a flight out tomorrow evening. I'm afraid I can't stop now; I have an appointment with the Ambassador. Good luck to both of you, although I'm sure you won't need it. Everything has been most thoroughly planned, hasn't it, David?"

"Of course, sir. Nothing foreseeable has been left to chance."

It is curious the way a single word can leap out of a sentence. It struck me that nothing that happened after we reached Chitral was foreseeable at this stage. Helen and I would be on our own.

Parsons had an open face and a charming manner, but God, how I wished he didn't have freckles. They made him look so naïve. He shook Helen's hand warmly and pumped mine up and down with such vigour that I felt in danger of losing my arm.

"Such a pleasure to meet you, Mr. Brandon. Only the other day, I was reading your article on French cheeses in the Good Food Guide. I've only been here a week, you know. So much to learn, isn't there?"

"To brie, or not to brie," I murmured. Helen dug me in the ribs sharply, one of her more irritating habits.

"Oh, marvellous," he chortled. "I must remember that. Genevieve will think it a hoot." Poor Genevieve. I hoped, for her sake, he might delay the retelling until spring. Love is much more forgiving when the sap is rising.

"Follow me," he said. "This shouldn't take long." He led the way to a small office at the end of the corridor, where we spent the next hour going over timetables and schedules, poring over maps, being issued with tickets, being given addresses of emergency contacts and receiving a thorough briefing about Abdul Jaleel Zemar, his habits and his weaknesses. That part was of particular interest. I was glad to hear the man had weaknesses, even if they only amounted to an over-inflated ego and an ambivalent relationship with his second-in-command. Parsons was nothing if not thorough. I began to revise my opinion of him.

We left the embassy with our heads spinning and hailed one taxi after another without success. I started to shiver, partly in defence against the freshening wind and partly a symptom of delayed shock at the enormity of our undertaking. The balmy breezes of a Paris street would be as nothing compared with the freezing temperatures and biting winds of the Hindu Kush.

We ducked into a nearby café for a mug of hot chocolate to stop my teeth from chattering. There were many things I wanted to talk through with Helen but now that we were together in the warmth, I found my resolve melting away. She sat opposite me, her elbows on the table and her hands forming a steeple, around which she peeped coyly with a mischievous look. The electricity between us set the base of my spine tingling. Why spoil the evening? Why look back?

"Well? What shall we do with our last night in Paris?"

"It may sound touristy, but I'd like to go on a romantic river cruise with my favourite man. One last look at all the famous landmarks: Notre Dame, the Eiffel Tower, the Musée d'Orsay, the Louvre..."

"We shall see." She drew her long, vermillion nails lightly across my cheek. "It depends on how brave you are. I am of the Kalash, where snow leopards roam wild and free." Her eyes sparkled as she curled her lip and growled.

Charles Brandon - the narrator, a well-known travel writer.
Group Captain Bamforth (alias Sir David Brockenhurst) - an intelligence officer with MI6 and Air Attache in Paris
Helen Culverson - Also a travel writer, whose relationship with Charles is complicated by her relationship with Jeanne Durand.
Kayla Culverson - her older sister, who disappeared somewhere in Bangkok and has surfaced again in Paris.
Madame Jeanne Durand - a French magazine editor and undercover agent with the French Drug Squad.
Madame Madeleine Bisset - Helen's landlady in Paris
Mr Bukhari - a Pakistani businessman (now deceased)
Ian 'Bisto' Kidman - an ex-RAF friend of Charles's.
Monsieur Bellini - a denizen of the French Underworld.
Andre (aka Scaramouche) - an actor in Montmartre and friend of Kayla's
Dr. Laurent - a veterinary surgeon in Versailles.
Father Pierre Lacroix - vicar of the Versailles Notre Dame church.
Madame Lefauvre - an old woman living in Versailles - the town gossip.
Alain Gaudin - brother of Francoise, a gardener at Monet's house in Giverney
Francoise Gaudin - Alain's intellectually disabled sister.
Estelle Gaudin [deceased] - mother of Francoise and Alain, a prostitute
Mademoiselle Suzanne Gaudin [deceased] - Alain's grandmother, to whom the mysterious letter of 1903 was addressed.
Jack and Nancy Wilkins - a Wiltshire dairy farmer and his wife.
Colonel Neville Arnoux [deceased] - of whom we may hear more later.
Gaston Arnoux - Owner of an art gallery in Paris. Asserted to be leader of an ISIS network in France
Abdul Jaleel Zemar (The Lion) - Coordinator of an international network of ISIS cells
Pays one point and 2 member cents.

Advertise With Us
Compartmentalization
a teacup dictionary poem

Pays: 10 points. and 62 member cents
Copyright © 2000 - 2020 FanStory.com. All rights reserved. Terms under which this service is provided to you. Our privacy statement.
top
You Have No Rank
Share 4 posts to be ranked.