The Eleventh of the Ninth by Robert Zimmerman

My muse is a Jack Russell Terrier named Ralph and he has a stubborn streak. If you don't like what I write sometimes, it's his fault.
My poetry consists of free verse, ballads and limericks.
I write short stories, fables and essays - more...

He is also an active reviewer and is holding the #16 spot on the top ranked reviewer list.

Remembering a day that changed the world.

The Eleventh of the Ninth


The author has placed a warning on this post for violence. 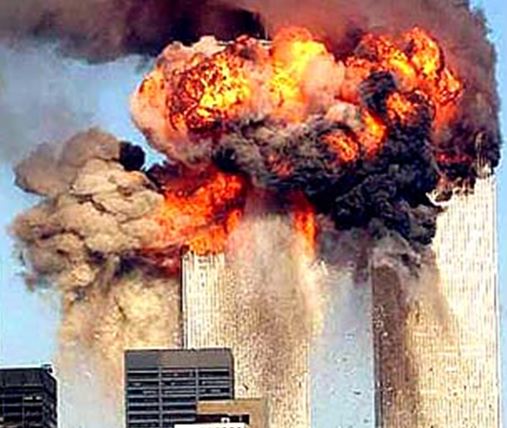 Two glistening obelisks soared into the crystal blue sky just like every other day. The Sun turned the sky into a translucent blue crystal that promised a day of beauty. Sky borne waters that wash creation would not be falling today because a glorious time of drying the land and drenching the cosmos with light appeared. The wind that hovered a thousand feet above the ground twisted its way between the two silver giants. The occupants of these two towers filled them like every other day.

Is it possible that this could be a perfect day in Gotham; the place of dreams? Maybe the day would transition into a night where the reward of a quiet meal and singing, dancing or seeing a show would ease the stress. A relaxing evening was often enough to allow the pressure valve to dissipate the high density steam generated in the boiler during the day.

Frank Benjamin learned many years before that predictability is predictably unpredictable. There were always expectations for the day as he rolled from bed each morning. When embarking on every new adventure he remembered a quote attributed to Mike Tyson: “Everyone has a plan until they get punched in the mouth.”  Getting punched in the mouth is metaphorical and physical.  The best days were the ones in which a punch never landed except the ones he threw.

As the day left the starting blocks, he had his first cup of coffee and sat at the desk watching the news and preparing for another conquest. Starting the day with a news rush prepared him for conversation, discussion or just stuff that made his chit-chat sound knowledgeable. Frank paid attention to the world and believed wariness was a positive factor in his success.

As he plowed through piles of proposals and technical data he needed to address, his mind alerted to a news bulletin coming through the little TV on his desk. They announced that during one of the clearest flying days of the year an aircraft appeared to have hit one of the WTC towers. As the mere thought of the event passed through his mind, Frank imagined the terror of a small plane hitting one tower. He felt a burning coal in his stomach thinking the pilot and the little plane would then fall a thousand feet to the pavement below. How horrifying that must be for the pilot and passengers. A twinge spread through his body thinking of the fright the people involved must have experienced. He turned up the volume and started concentrating on the story as he shifted away from the meetings planned for the day. The thought of the event brought back memories of past personal flights in small planes to remote areas for work projects. Those flights often resulted in upset tummies.

News feeds started describing conflicting stories that frighteningly confirmed it was not a small plane. One announcer advised it was a large commercial jet that hit the tower. Frank thought to himself how absurd that would be. No way could that happen in this day and age. With technology on the ground and in the air along with superbly trained and competent pilots and crews, there is no chance this could ever occur.

He questioned his sanity because the thought flashed through this tight mind that supposed What if this was done intentionally?  It was ridiculous to think such an act could be perpetrated deliberately by a rational or sane person. As denial permeated his being, he told himself no person would be evil enough to fly a large airplane full of jet fuel and passengers into a building full of people. That would surpass evil.  It would be heinous and abominable. The worst part of this day was learning this was an act of war on innocent Americans.

Without seeing the images, it became clear what was happening in the city. What occurred was a Godless act of evil designed to terrorize and destroy. It would trap these victims within what would become a picture of the place called Hell (or Gehenna) would look like. What in the world is happening?

Frank tried to imagine the horrors of the passengers in the plane and the innocents in the building. Thoughts became alarming and bloodcurdling. Was anyone in the structure watching thousands of tons of aluminum and aviation fuel going 350 miles per hour on a collision course with them? Just thinking of a scenario like that caused more pain and adrenaline eruptions through his body. What were the passengers thinking? What was the crew thinking? Who piloted that missile?

For his sanity and clarity of mind he forced himself to review the logic of what he was seeing and experiencing. He began to experience oppressive fear as the events occurred before his eyes. The fear he experienced was pervasive and would cover the entire world for days, if not forevermore.

As he reeled from the sight before him a second plane twisted its way through the air making a horrible droning noise as it plunged into the second tower and a fireball erupted through the building. He was seeing death, fire, fear, terror and all the things that make nightmares.

As another plane struck the second tower, the sun was no longer streaming down as smoke turned the sky into a black shroud. The two majestic obelisks were burning, and no longer glistened in the morning sun. They looked like Hiroshima destined to deliver death and destruction on a scale unimagined in the morning sun in the Big Apple.

Watching the progressive destruction of the towers reminded him of a heavyweight fighter being walloped repeatedly. He saw these two giant gleaming structures of steel and concrete staggering like a helpless boxer that had taken too many punches. When the boxer had taken all the beating, he could handle he would stagger and fall to the mat.

He felt a panic and said to himself, is it possible that those two towers will disappear from the skyline as I watch? An unimaginable and unspeakable thought ripped through his mind. What would happen if these landmarks of liberty became the tombs for thousands of people?

As the smoke ascended from this terrestrial hell Frank feared for tomorrow. He wondered what kind of evil would perpetrate this terror against innocent people. He pondered what America would do in response to this day that would live forever.

More horror presented itself. As the buildings burned and spewed black smoke into the sky and debris to the ground, unthinkable things came into view. He saw objects falling to the ground from the buildings. It looked like it was part of the building crumbling. On closer look and with commentary from the TV, he realized these were human beings jumping to their death. More horrible circumstances were raining down. The innocent people trapped in the fires decided it would be preferable to plunge 1500 feet to their death than to burn alive.

When does misery become too great? When does pain become too severe? As people confront the moment of death what do they think? He was not only watching people die horrible deaths, but he was watching some of them decide how they would die.

The emotional pain and destructive emotions overwhelmed him. He sat and stared at the wall. He cried and prayed because wicked men had committed an act and started a fire that only God can extinguish.

As Frank wanted to turn away and watch no more, he saw the climax to this horrible event. From street level he saw the avalanche of smoke, dust and debris in the clouds of death as they bulldozed the streets and forced people to choke and gasp for their next breath.  They must surely have wondered if there would be another breath. Strangers clutched others and poured water over their faces and gave them drinks to clear air passages so they could breathe and swallow without a struggle.

Frank wondered if anything would ever be normal again. He wondered if the families and loved ones who survived this tragedy could live without the thousands these evil acts murdered.

As he tried to convert the horrors he had seen into a message, he concluded man is capable of hate and destruction on an unimaginable scale.

Story of the Month contest entry

A fictionalized eyewitness account based on a real event on 9/11/2001.
This is a recollection of what I saw on that day.
I will never forget it.
Pays one point and 2 member cents.

Advertise With Us
Rocky's
A 500 word tavern late at night

Pays: One point. and 84 member cents
Copyright © 2000 - 2020 FanStory.com. All rights reserved. Terms under which this service is provided to you. Our privacy statement.
top
You Have No Rank
Share 4 posts to be ranked.