Some Awkward Conclusions by tfawcus

Chapter 86: On the train to Islamabad 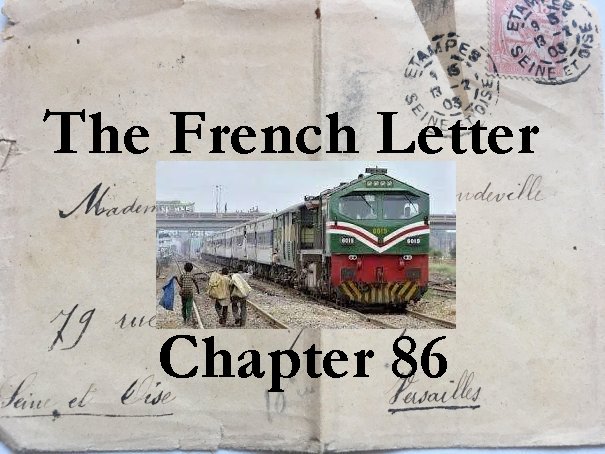 Gradually, we began to pick up speed and I felt the tension drain from my body. This relaxation brought with it a sudden and overwhelming sensation and need for relief. Excusing myself with a gesture, I backed out of the compartment, and made my way down the corridor, my gait like that of a sailor as I adjusted to the sway of the carriage and the comfortable rhythm. Clickety-clack, clickety-clack, we-have-escaped, clickety-clack, we-have-escaped, now-we-are-freeee.

The engine let out a screech of exaltation that was echoed in my heart then, without warning, it plunged into the gaping maw of a tunnel. The brief moment of elation was swallowed up in sooty darkness and a bone-rattling terror of the unknown; a forewarning that our adventures had scarcely yet begun.

When I returned to our compartment, I found Helen in conversation with the garrulous man. Conversation is not really the right term, for she was merely fending off his gush of words with monosyllables. I bowed slightly in her direction as I shuffled between them to take a seat in the corner by the window. The thin man had left, presumably to seek a quieter compartment. He had taken his newspaper with him.

Unable to communicate with Helen without giving myself away, I pressed my brow against the glass shield separating me from the outside world. Windblown debris whirled around as the Subak Raftar Express thundered past shanty villages. Women carried impossible loads, and mongrels cringed in patches of shade from backyard pawpaw and banana trees. Purple bougainvillea cascaded over a tumbledown fence that defined a dusty track, down which a donkey plodded. The weathered man who led it wore a loose-fitting shirt stained with sweat, ingrained with poverty.

As this foreground blur fell behind us, my eyes were drawn to the line of snow-capped mountains crouched low on the horizon; mountains with narrow ravines and gullies, through which a resinous traffic of oblivion was traded out of Afghanistan by hard-faced men without scruple; mountains that grew more ominous and formidable as we rolled relentlessly towards The Lion's den.

My thoughts turned to Kayla languishing in a cocaine-induced stupor in her garret in Montmartre, and I prayed that Alain would remain true to his word in caring for her. I thought of Madame Jeanne Durand and her underground war against the drug barons, and wondered whether she really was the evil woman I'd taken her for.

Then, as we passed a lazy herd of red Zebu cattle with their monstrous dowagers' humps and long floppy ears, I thought of Jack Wilkins bringing his cows in for milking, with Nancy churning curds for her famous Wiltshire Blue cheeses. There, too, in my reverie, was Bisto, tinkering with his boat moored behind The Willows, with Biggles snoozing at his feet. What a world away it seemed.

Eventually, the fat man opposite Helen heaved himself up, leered at her, and ambled off towards the restaurant car. We were alone at last.

"What an awful man! When he wasn't puffing himself up like a peacock, he was demeaning me with disgusting innuendos. If you hadn't been in the compartment, I dread to think what he might have tried on."

My mind was drawn back to a similar circumstance months ago in Bangkok, when she had killed Bukhari in the back of his car with a single blow to the throat.

"I've no doubt you'd have handled it. There's nothing in that sexy outfit to suggest a mistress of the Art of the Eight Limbs, but you'd have split his lip open and blown our cover without even thinking about it."

"It would have been worth it, too. We're going to have to shed these costumes sooner or later." She made an extravagant gesture with her fists and elbows, and there was the sound of a ripping seam.

"Blast! I hope you've got a safety pin."

"A safety pin? You must be dreaming. It looks as if you'll have to call a security guard and charge the sleazebag with assault."

A tall shadow fell across the doorway. "I wouldn't if I were you. That odious ball of fat has half the police force of Pakistan in his pocket. He's a dangerous fellow." Our saturnine travelling companion resumed his seat in the corner, regarding me with amusement. "I must say, you'd make a dashed fine punkah wallah in that outfit, Charles. David warned me there might be more to you than meets the eye."

Helen and I exchanged glances. Who was this man, and how did he know about us? It seemed that Bamforth had left nothing to chance. He was tracking our every move.

"When you get to Rawalpindi, you'll find a taxi waiting for you outside Chuno Autos on the Pindi Railway Road. You can't miss it; it's just outside the station. You'll know which one, because there'll be two pink plastic elephants suspended from the rear view mirror." He paused then added, "We enjoy our little jokes."

"I dare say. However, before we start hunting the streets of Rawalpindi for pink elephants, perhaps you'd like to tell us just who the hell you are."

"You don't need to know. Let's just say I'm loosely attached to the British High Commission in Islamabad. In the same game as your friend, Jeanne Durand, actually. It is because of her that I'm here. Helen will be able to fill you in on the details. Won't you, my dear?"

Helen coloured. It dawned on me she'd been playing a closed hand, and I didn't like it; especially as it involved Jeanne Durand. Nonetheless, I remained tight-lipped, waiting for the explanation that never came. She seemed to be tongue-tied. The awkward silence that ensued was suddenly broken, first by a buffeting and tarantella of noise as another train passed us, hurtling along in the opposite direction, then by the reappearance of our other travelling companion. I was left to simmer, conjuring with possibilities as I wondered just what kind of a double game she was playing.

There was now little doubt in my mind that she had divulged our travel plans to this man from the High Commission. How else could he have known, not only which train we'd be on, but also which compartment we had booked? I spent the remainder of the journey mulling things over. Who else had she told? Apart from Bamforth and Madame Durand, the only other person I could think of with a direct connection to the Hindu Kush was Gaston Arnoux. Bamforth had told me of his work as a double agent in Abdul Zemar’s European network. When his cover had been blown, his disappearance had been arranged by the explosion at La Galerie Arnoux on Rue de Dunkerque, an explosion caused through my unwitting agency.

I recalled with a shudder our last meeting with him, in the briefing room of the British Embassy in Paris. Had it been coincidence that Helen, Jeanne, and he had been sitting together at the table? Was there a nexus between them? What if he were playing a triple bluff and, unbeknown to Bamforth, in cahoots with our nemesis, Zemar? An absurd proposition, or was it? That would go a long way towards explaining why Rasheed had been our taxi driver in Lahore. How far-fetched would it be to imagine that he, too, was in Zemar's employ?

I felt as if a clammy hand had clutched my heart when I realised that, apart from Bamforth and me, Helen was the only other person to know of the existence of the mole in The Lion's lair. If my guesses were correct, she was in a position to blow the whole operation apart, and I was a dead man walking.

Pays: 10 points. and 1.05 member dollars
Copyright © 2000 - 2020 FanStory.com. All rights reserved. Terms under which this service is provided to you. Our privacy statement.
top
You Have No Rank
Share 4 posts to be ranked.