The Vultures Gather by tfawcus 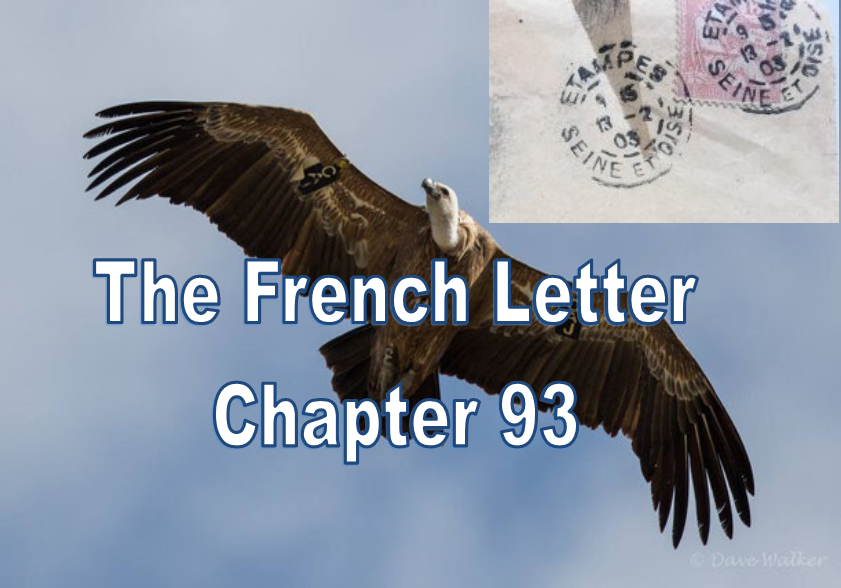 It seemed to me a hare-brained scheme, but I was at a loss to suggest a better alternative. "All right," I said. "We'll see how you are come nightfall, though I doubt we can follow the road without being spotted."

As if to reinforce my point, a police van drew up below. Several men got out, and two of them abseiled down the rockface to the burnt-out wreck of the minibus. A few minutes later, a tow truck with a winch appeared. Helen and I crouched low and retreated to the safety of our shelter.

I was unnerved by the proximity of the police. We were only a couple of hundred yards from the road, and our dugout, which had been well camouflaged by the blizzard, was now a gaping hole with footprints all around it. I felt like a fox gone to earth, listening to the baying of hounds as they came closer.

Helen echoed my thoughts. "We can't stay here all day. They're bound to start searching the area before long."

"But there's nowhere to go. The Chitral road is too great a risk in broad daylight. We can't even get down onto it with the police swarming below."

"There is another way."

"Oh, yes? Enlighten me." I scrabbled about in the top of my pack in search of food and passed Helen an energy bar.

"There's no need for sarcasm. I was born here, and I know the area."

"But you grew up in Chitral. How well do you really know the Kalash valleys?"

"Better than you." Her eyes blazed as she bit into the bar. "Our mother often used to bring Kayla and me here when father was away. She didn't want us to lose touch with our roots."

I recalled our conversation in Versailles. "Yes, I remember. You told me he worked for the Aga Khan Programme. That would have taken him away from home quite often." I carried on rummaging around for more food and found two sachets of porridge. "I say! Do you think we could risk a fire?"

"Don't be such a fool." The way she snapped made me realise how much on edge we both were.

"Only joking - but I'm starving." I put the porridge back and brought out two oatmeal blocks. "These will have to do. I hope you've got strong teeth. You'll need them."

She took one and started unwrapping it. "We could cut back behind this ridge to Gabhirat. It was the last place we went through yesterday evening. Only a couple of miles south of here as the crow ..." She stopped and grinned when she saw the look on my face. "All right, three miles, perhaps. There's a river crossing there, onto the Birir Valley Road. It's a rough track and seldom used, but scarcely more than an hour's hike to the southern end of Ayun."

"Then we'd have a four-hour hike to Batrik tomorrow."

I did worry. I worried a lot. The idea of slogging for miles through snow with Helen was daunting enough without the added impediment of her injury.

"Are you sure you can make it, with your twisted ankle?"

"It's nothing. Just a slight sprain. The greater concern is whether you'll be able to keep up with me."

Nettled because I was afraid it might be true, I said, "We'll see."

It didn't take long for us to pack our things and, while Helen was re-strapping her ankle, I took cover behind a rocky outcrop to check what was happening below. I was relieved to see no sign of a wider search being organised.

There were still ominous banks of cloud on the horizon, but the sky overhead was clear and, even at this early hour, the sun was gaining strength. A shower of snow cascaded from the branch of a nearby pine tree, making me start. The thaw had begun.

Helen was already shouldering her backpack when I returned. She pointed to a scree slope. "We'll have to skirt around the bottom edge of that if we're to stay out of sight from the road. Once the sun gets onto it, the melting snow may destabilise the rocks." She tugged at my arm. "We should get going. The longer we delay, the more dangerous it will be."

We made good progress at first and were soon beyond the shelter of the ridge. The gurgling of the river below was faint, its echoes of laughter muffled by the snow. We felt oppressed by the burden of silence, broken only by the crunch of our boots and the sinister burble of freshets coursing through the shale.

The slide was slow when it came, a creeping flow, loose rocks rolling, a gradual rumble, a gathering roar, then boulders that bounced like beach balls across the ocean surge.

We backed away from the brink of destruction as small trees were torn from the ground. They tumbled like acrobats in a danse macabre. One or two small rocks skewed sideways and hurtled over our heads. I wrestled out of my backpack and held it up in front of my face in a futile attempt to ward off flying debris.

Helen grabbed my arm to pull me away from the danger, but I slipped and fell, dragging her down with me. My backpack was torn from my hand. As we stumbled to safety, it was borne away like a ragdoll in a roiling sea.

Within seconds, the last of the rocks came to rest. The sound subsided. The silence was complete. It was as if the world had come to a standstill. We clasped each other as we gazed at the scar carved out by the slide and stood, overawed by the devastation.

Three specks in the sky circled and slowly descended. As they wheeled above us, their serrated wingtips and long, scraggy necks came into clear focus.

"Look," said Helen. "Griffon vultures, down for a feed."

One of them landed close by and stood with shoulders hunched and head stretched forward. I shied a stone at it, but it lumbered to one side. It regarded us balefully, as if disappointed at our good fortune.

"Come on. Let's get out of here. That bird's giving me the creeps." Helen took me by the hand and started to lead me forward, picking her way through the rocks.

"Careful," I said. "You don't want to start another slide."

"You can say that again."

So I did. "Be careful. You don't want to start another slide."

"Oh, shut up!" she said, as she skipped the last few feet to safety, landing awkwardly.

I scrambled after her, dislodging a loose rock in my haste. It tumbled away harmlessly, coming to rest a few feet lower. I flushed as she arched her eyebrows at me.

We could already see a few wooden huts and buildings on the outskirts of Gabhirat below. As I followed her down the narrow track, I noticed that Helen's limp was more pronounced.

"Here, let me take your pack," I said. "You can lean on my shoulder if you like."

She acquiesced more easily than I had expected. "I turned my ankle again coming across those rocks. Nothing serious, but it's a bit sore. I shall be glad when we're down on the flat."

Charles Brandon - the narrator, a well-known travel writer.
Rasheed - a Sikh taxi driver in Lahore, radicalised by ISIS
Abdul - a taxi driver in Islamabad, working under cover for the British High Commission
Hassim - a tour operator
Ash - a French liaison officer attached to the British High Commission in Islamabad. Also a member of the French anti-drug squad (la Brigade des stupefiants), whose operations are directed by Jeanne Durand.
Montague (Monty) - a member of staff at the British High Commission in Islamabad.
Sir Robert - the Deputy High Commissioner at the British High Commission in Islamabad (a personal friend and confidante of Group Captain David Bamforth, the British Air Attache in Paris)
Abdul Jaleel Zemar (The Lion) - Coordinator of an international network of ISIS cells
Helen Culverson - a woman of increasing mystery
Kayla Culverson - her older sister, who disappeared somewhere in Bangkok and has surfaced again in Paris.
Group Captain Bamforth (alias Sir David Brockenhurst) - an intelligence officer with MI6 and Air Attache in Paris
Madame Jeanne Durand - a French magazine editor and undercover agent with the French Drug Squad.
Madame Madeleine Bisset - Helen's landlady in Paris
Mr Bukhari - a Pakistani businessman (now deceased)
Ian 'Bisto' Kidman - an ex-RAF friend of Charles's.
Monsieur Bellini - a denizen of the French Underworld.
Andre (aka Scaramouche) - an actor in Montmartre and friend of Kayla's
Dr. Laurent - a veterinary surgeon in Versailles.
Father Pierre Lacroix - vicar of the Versailles Notre Dame church.
Madame Lefauvre - an old woman living in Versailles - the town gossip.
Alain Gaudin - brother of Francoise, a gardener at Monet's house in Giverney
Francoise Gaudin - Alain's intellectually disabled sister.
Estelle Gaudin [deceased] - mother of Francoise and Alain, a prostitute
Mademoiselle Suzanne Gaudin [deceased] - Alain's grandmother, to whom the mysterious 'French letter' of 1903 was addressed.
Jack and Nancy Wilkins - a Wiltshire dairy farmer and his wife.
Gaston Arnoux - Owner of an art gallery in Paris. A triple agent, who infiltrated the ISIS network in France and fed information to MI6, but who is now providing information to Abdul Jaleel Zemar (The Lion).
Colonel Neville Arnoux [deceased] - Gaston's grandfather. Author of the infamous letter of 1903.
Pays one point and 2 member cents.


© Copyright 2020. tfawcus All rights reserved.
tfawcus has granted FanStory.com, its affiliates and its syndicates non-exclusive rights to display this work.
Advertise With Us
What Will YA Do Wi' ME?
An old, smashed tin can seeks redemption.