Some Awkward Questions by tfawcus 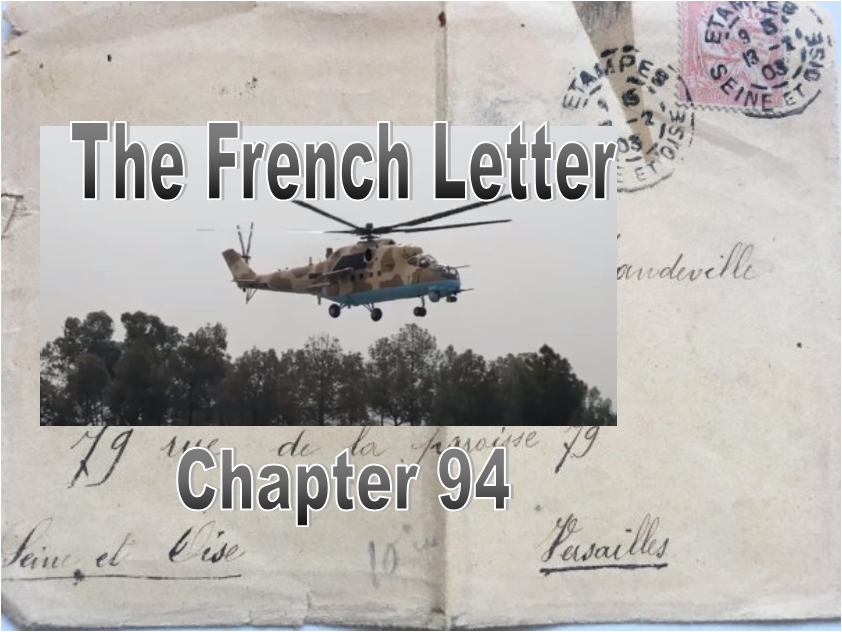 We could already see a few wooden huts and buildings on the outskirts of Gabhirat below. As I followed her down the narrow track, I noticed that Helen's limp was more pronounced.

"Here, let me take your pack," I said. "You can lean on my shoulder if you like."

She acquiesced more easily than I had expected. "I turned my ankle again coming across those rocks. Nothing serious, but it's a bit sore. I shall be glad when we're down on the flat."

We were perhaps three hundred yards short of an orchard of apricot trees when the air began to reverberate with the steady thwhump, thwhump, thwhump of a helicopter rotor. We were on open ground with nowhere to take cover. It swooped over the ridge at about fifty feet. The noise was deafening, and we were nearly blown over by the downwash as it flew overhead. Fifty yards on, it reared up like a warhorse and wheeled around to face us before landing in a flurry of snow. Four men leapt to the ground, crouching low as they ran. They fanned out in a semicircle, covering us with their automatic weapons.

The two on our flanks circled in behind. The others waved us forward, an invitation reinforced by cold, hard muzzles jabbed into our backs. Helen was pushed away from me. She stumbled and fell but was prodded back to her feet again. As we approached the helicopter, our heads were pushed down, and we were propelled towards the door. Two of the men climbed aboard, grabbed our arms, and hauled us in after them. We had scarcely slumped into the webbing seats opposite before the aircraft lifted off again.

Shell-shocked by the sudden turn of events, we stared at the impassive faces of our captors. They wore the black shirts and berets of the Khyber Pakhtunkhwa frontier police. Unsure where they were taking us, I glanced out at the river. We were flying upstream towards Chitral.

Ten minutes later we landed close to the edge of a large, open space. As the rotors slowed, Helen nudged me. "Oh, my God! This is the High School sports ground. I used to play hockey here."

"Jolly hockey sticks," I muttered through gritted teeth. "It looks as if we've just become pawns in a greater game."

Our captors escorted us across the road to the Chitral Police Station, and Helen gave me one last despairing look as she was dragged down a corridor and pushed through a door on the right. It was the last I was to see of her for some time.

I was taken to what I naïvely assumed to be an interview room. There was a wooden table in the middle with an upright chair on either side of it. My arm was pinioned, and I was frogmarched across to one of the chairs and secured with leather straps. My captor grinned, his body odour overpowering me as he leant forward to check their tightness. He yanked on them sharply, then stepped back with sadistic satisfaction and turned off the light. The door closed with a click.

The whole operation had taken place in silence. Weaselface apparently lacked conversational skills, and I was too scared to speak.

I was left tied up in the dark for what seemed like hours. I could hear occasional laughter outside, and the thin strip of light under the door was interrupted by shadows every time someone walked past. My arms were aching from the cruel restraint, and my imagination raced as I wondered what was in store for me.

Eventually, the door opened, and the light was turned back on. I screwed up my eyes against the glare. The man who entered had refined features and an aquiline nose. He stood in front of the table, eying me speculatively. Three rows of medal ribbons were attached to his uniform jacket. His right hand gently twirled the end of a thin, waxed moustache, and a sickly smell of hair oil invaded my nostrils.

"I am Tariq Habeeb, the Senior Superintendent of Police for this region." He walked a few paces towards the edge of the room and stopped with his back to me, apparently studying the anaemic, green paintwork before returning to his previous position.

With an air of bravado that I did not feel, I said, "I'm Charles Brandon, a British citizen under false arrest. This is outrageous. I demand consular representation."

"Demand?" He raised his swagger stick, and I thought for a moment he was going to hit me. Instead, he caressed the bare globe suspended from the ceiling and set it swinging. "May I see your papers, please?"

My stomach muscles fluttered briefly, and I felt an extreme urge to void. "They were in my backpack, which is now buried under a rockfall."

"So - you have no means of identification?" He sat down opposite me.

My mouth was suddenly so dry that I could barely speak. "May I have a glass of water, please?"

Scarcely raising his voice, he said, "Hussein, bring us a jug and two glasses."

It seemed that Weaselface had been expecting the order, for he appeared almost instantaneously with a tray. The Superintendent of Police poured a little water into one of the glasses and sipped it slowly.

"What is the purpose of your visit to Pakistan, Mr. Brandon?"

I looked at the empty glass in front of him and said nothing. He filled it and pushed it across the table towards me. "Untie Mr. Brandon's arms please, Hussein."

I grabbed the glass unsteadily with both hands and took a deep draught. "I'm here on a trekking holiday." I rubbed my wrists to restore circulation before continuing. "We were on our way to explore the lower slopes of Tirich Mir."

"Ah, Tirich Mir, the one we call the King of Darkness. Its shadow falls upon Chitral. A fascinating mountain but dangerous." He moved his glass a little to the right. "... but you were travelling in the opposite direction when we picked you up. Why was that?"

"We were on our way to seek help. Miss Culverson had twisted her ankle."

"Really? If you were in need of assistance, I'm surprised you didn't make yourself known to the police salvaging your vehicle. Instead, it seems that you chose to sneak away from your snowhole like fugitives."

So, they had discovered the snowhole and our tracks leading away from it. That explains the helicopter.

Switching subjects, he said, "You have heard of Abdul Jaleel?"

"Yes," I blurted out, without thinking. "Isn't he the one they call The Lion?"

"I'm surprised at the extent of your knowledge, Mr. Brandon. When did you say you arrived in Pakistan?"

"I didn't. We landed in Lahore three days ago."

"Ah, yes. The day of the Liberty Market bombing. That was also Abdul Jaleel's doing."

"But you thought Zaheed was a Sikh, a member of the Separatist Movement."

"Zaheed? Who is Zaheed?"

"Don't play games with me, Mr. Brandon. When we stripped away the scarlet turban, guess what we found beneath: an Islamic extremist. He squealed like a rabbit before he died." Habeeb paused to let the information sink in. "How did you get to Islamabad?"

"We caught the train next morning, the Subak Raftar Express."

"I don't think so. We would have known. The station was under heavy surveillance. We were looking specifically for the European man and woman who had been seen climbing into Rasheed's taxi after the bombing." Once again, he paused. "... unless, of course, you were in disguise - but there would have been no reason for that, would there?"

He got up and moved towards the door. "The Charles Brandon who landed at Lahore Airport told Immigration that he was a writer who had come to our country on a working holiday with his wife. They were apparently intending to do some research for an article extolling the virtues of our beautiful country. Are you that Charles Brandon, I wonder, or is this an intriguing case of identity theft?"

He nodded towards Hussein, who came up behind me and re-tied my arms to the chair, giving a particularly vicious twist that made me wince with pain.

"I shall be back, Mr. - er - Brandon. We are also interested to know why you were the only two people in the trekking group to escape, and why Abdul Jaleel's men did not hunt you down and kill you."

As a parting gesture, Hussein threw the remains of the jug of water in my face and spat on the floor.

Charles Brandon - the narrator, a well-known travel writer.
Rasheed - a Sikh taxi driver in Lahore, radicalised by ISIS
Abdul - a taxi driver in Islamabad, working under cover for the British High Commission
Hassim - a tour operator
Ash - a French liaison officer attached to the British High Commission in Islamabad. Also a member of the French anti-drug squad (la Brigade des stupefiants), whose operations are directed by Jeanne Durand.
Montague (Monty) - a member of staff at the British High Commission in Islamabad.
Sir Robert - the Deputy High Commissioner at the British High Commission in Islamabad (a personal friend and confidante of Group Captain David Bamforth, the British Air Attache in Paris)
Tariq Habeeb - the Senior Superintendent of Police in Chitral
Abdul Jaleel Zemar (The Lion) - Coordinator of an international network of ISIS cells
Helen Culverson - a woman of increasing mystery
Kayla Culverson - her older sister, who disappeared somewhere in Bangkok and has surfaced again in Paris.
Group Captain Bamforth (alias Sir David Brockenhurst) - an intelligence officer with MI6 and Air Attache in Paris
Madame Jeanne Durand - a French magazine editor and undercover agent with the French Drug Squad.
Madame Madeleine Bisset - Helen's landlady in Paris
Mr Bukhari - a Pakistani businessman (now deceased)
Ian 'Bisto' Kidman - an ex-RAF friend of Charles's.
Monsieur Bellini - a denizen of the French Underworld.
Andre (aka Scaramouche) - an actor in Montmartre and friend of Kayla's
Dr. Laurent - a veterinary surgeon in Versailles.
Father Pierre Lacroix - vicar of the Versailles Notre Dame church.
Madame Lefauvre - an old woman living in Versailles - the town gossip.
Alain Gaudin - brother of Francoise, a gardener at Monet's house in Giverney
Francoise Gaudin - Alain's intellectually disabled sister.
Estelle Gaudin [deceased] - mother of Francoise and Alain, a prostitute
Mademoiselle Suzanne Gaudin [deceased] - Alain's grandmother, to whom the mysterious 'French letter' of 1903 was addressed.
Jack and Nancy Wilkins - a Wiltshire dairy farmer and his wife.
Gaston Arnoux - Owner of an art gallery in Paris. A triple agent, who infiltrated the ISIS network in France and fed information to MI6, but who is now providing information to Abdul Jaleel Zemar (The Lion).
Colonel Neville Arnoux [deceased] - Gaston's grandfather. Author of the infamous letter of 1903.
Pays one point and 2 member cents.


© Copyright 2020. tfawcus All rights reserved.
tfawcus has granted FanStory.com, its affiliates and its syndicates non-exclusive rights to display this work.
Advertise With Us
What Will YA Do Wi' ME?
An old, smashed tin can seeks redemption.