I'm a fiction author and live in the beautiful Lakes Region area of New Hampshire. Although I've always wanted to be a published author, it took me until after my mother passed away in 2001 to get serious and write that first book. That novel - more...

Co-Authored with Bill Bishop (aka Commando)

A chapter in the book Love Long Distance 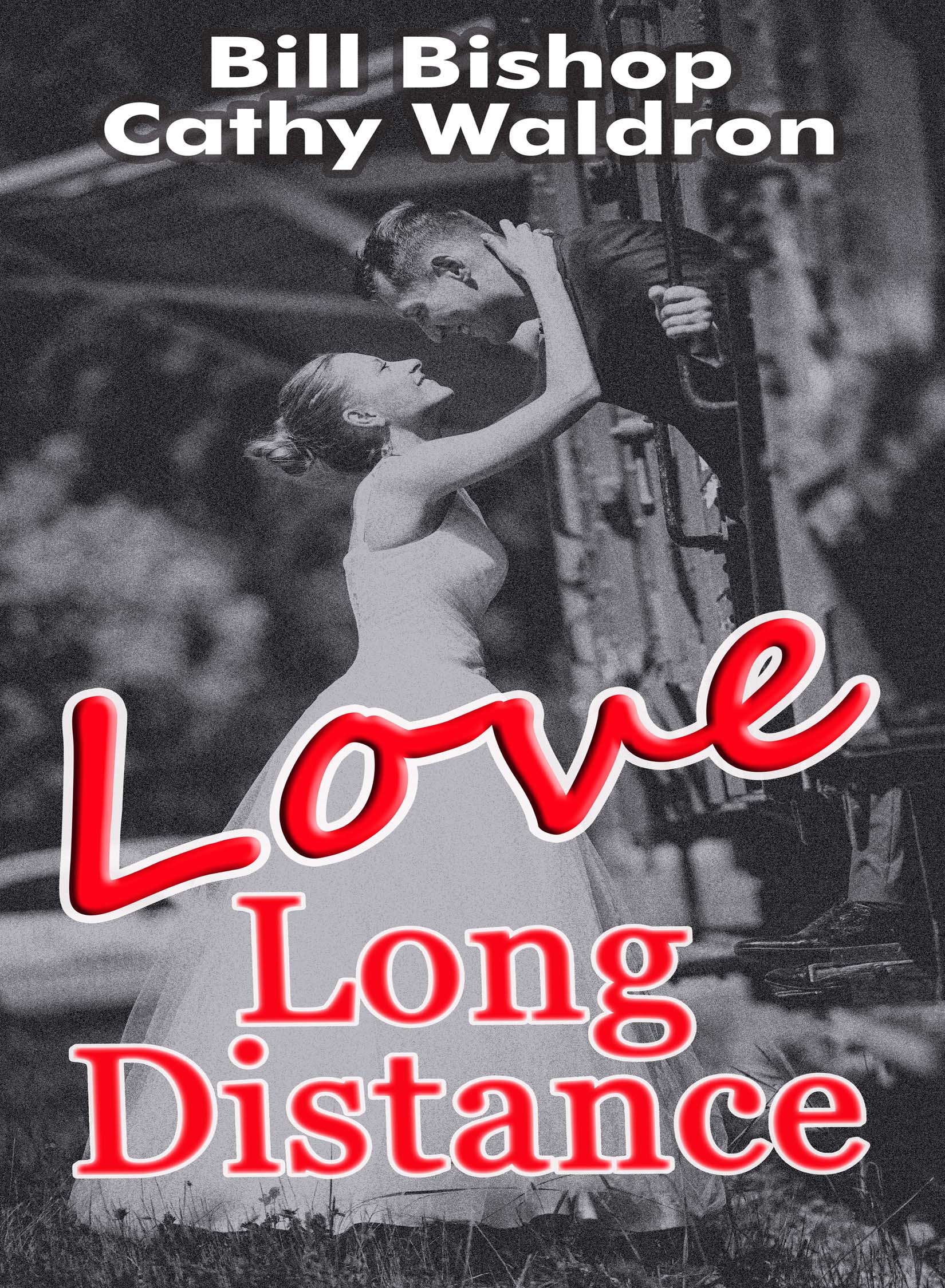 
Just then, the doctor arrived, checked Grandpa's vitals, turned to Grandma and said, "I'm sorry, ma'am, his prognosis looks grim. Of course, I'll do everything I possibly can."

"What can we do to help, Doctor?" Grandma asked."

"Join hands and ask God for a miracle!" the doctor replied.


I could hear everyone talking around me; yet, I couldn't move or say a word. Lately, I'd been having chest pains, but told no one. Earlier, I had met with an attorney to look over my will. No way was I going to leave Grandma without a penny in her pocket. Of course, Billy and Cathy would need some money to start a family once he returned from the war...that is, if he returned.

Life's been good to me overall. I can remember the first time I laid eyes on Grandma. Wow! She was a beauty. Since then, I've seen her go from blond to gray, and she's still the most beautiful lady in the whole wild world to me. Why, I'm the luckiest man alive to have her as my bride. She's been by my side through thick and thin. She's put up with my flamboyant ways, my moonshining days, and my more than occasional cussing and complaining. "Where did everyone go? Why can't I hear you any more?" I tried to say as I felt myself slipping back to earlier scenes in life...
*******
As the golden rays of an eastern sunrise warmed my bones, I stood tall--with my shoulders straight, chin up, chest out, and proud to be an American soldier of the 82nd Airborne Division, and, as well, a Tennessee Mountain Man. The year was 1918, we were in Germany ... and ready to kick ass.

Just then, our trench was saturated with shells filled with phosgene gas. Some of us were able to put on our protective masks, yet, others were not. Within seconds, those who were exposed died from a build-up of fluid in their lungs, later called "Dry Land Drowning."

"Why was I feeling so sleepy all of a sudden?" I wondered. The bombardment had ceased but I could still feel the rattle in my bones. Then, I remembered dancing with Grandma to the song, "If You Were the Only Girl in the World" before I went off to war. Oh, my! Her body was pressed close to mine--oh, so fine, while we drank a quart of muscadine wine. I do swear, that knowing she is home waiting for me is what has kept me alive. Suddenly, I felt myself moving forward, and saw the past rushing by.
*******
"Grandpa's had a heart attack and there is some damage, although we don't know how much yet," the doctor said to Grandma. "We have to keep a watch on him in ICU for at least 24 hours and run some tests. Right now, he's just lucky to be alive."

"Oh, my beautiful mountain man," Grandma said as she stood by his side and looked down on him. She stroked his head and gave him a kiss on his sallow cheek. Grandpa didn't respond and appeared so frail.

There was a little commotion as the medics came and moved him from his bed to the stretcher. Grandpa still didn't open his eyes. They attached some tubes, and, as they were headed to the ambulance, Grandma called out, "I'm coming with you!" She turned to Cathy, and said, "Now you call Billy and let him know. He wouldn't forgive us if we didn't tell him."
*******
My hands were shaking as I dialed the emergency number Bill had given me. After two rings, a stern voice answered.

"Hello, my name is Cathy. I'm Bill Bishop's fiancée. We have an emergency here. I need to speak with him right away!"

"Lady, this is a big place and I have no clue, offhand, who Bill Bishop is," the man replied.

"Oh, if you'd met him, you wouldn't forget him! Please...it's a matter of life and death."

"I'm sorry, ma'am, but you aren't his immediate family."

"I'm begging you. Have him call me as soon as possible. He knows the number." I began to cry and the man's voice softened.

"Hi Darlin', what's the emergency?" he asked. "Let me guess...you're having our baby! Goody, Goody!"

"How did you know? I haven't told a soul yet, and my doctor's not talking!" Cathy replied.

"That's a good one, Beautiful! I was only joking with you."

There was sudden silence before Cathy went on. "I was going to tell you, but then Grandpa...well, he's in ICU. He's had a heart attack and there's no telling if he's going to get through this."

"Awe, Honey! Don't worry, because Grandpa's made of strong chain and he's going to make it. I'll get an emergency leave to come home, and we'll get his heart pumping again like new. I'm going to be a daddy, too, and I want to feel our baby kicking inside you. Now, listen up...I'll be home before the next teardrop falls."

"Please be careful, my darling...'I LOVE YOU HEART AND SOUL!'" Cathy replied as she began to dry her eyes.

"Right back atcha, Beautiful!"
*******
Once explaining the dilemma to the Commandant, he had orders cut and I was homeward bound. Not having money for a bus ticket, I would hitchhike as I had done many times earlier in life. I grabbed my duffle bag, threw in the bare essentials, then headed out. Walking along the road, I held my thumb up, smiled, then saluted the passing motorists. All at once, the driver of a '64 VW Bus pulled off onto the side of the road, then yelled, "C'mon, turkey--get in, and let's gobble!"

"Damn it ... just my luck. Another Greenwich Village beatnik lost in Florida," I said to myself.

I slowly walked up to the red and white bus, took my hand, did my commando squeeze on his Adam's apple, then said, "If you ever call me turkey again--it better be on Thanksgiving Day." Now, by the grace of God you're still alive, so, haul ass!"

"You, betcha it is, Billy! So, go do your chores, jump in bed, then get a heap of sleep. 'Cause we'll be heading out when the rooster crows at daylight."

Grandpa and I went hunting early Thanksgiving morning. Both of us bagged a whopper, and Grandma cooked 'em for supper--yummy, yummy! The love we shared with one another, remains etched on my mind.
*******
"Geez! Come on back from yesterday!" I said to myself, 'cause you have a long way to go to be with Grandma, Grandpa, Cathy, and our baby. At that moment, I heard a horn sound--turned around, and saw an 18-wheeler coming my way.

"Sweet Jesus! What's a 'matter with that fool driver? He's lost control of the truck and is going to run over me! Why me, God?"

I heard a thud, then felt myself tumbling along the road. Although the darkness was walking across my eyes, I saw Cathy smile, wave, then heard her say, "We're waiting, Honey--hurry along!"
********
Will Bill die? Will the baby grow up without a daddy? Stay tuned...
Chapter 19 is coming soon!
We thank you for reading our work
and your continued support.
God Bless,
Bill (Commando) & Cathy (Tootie)


Co-authored by Bill Bishop (aka Commando) and Cathy Waldron (aka Tootie).
If you haven't read the previous chapters, we encourage you to do so. We are posting each chapter as we complete it and plan to finish and publish this novel early next year. As always, any comments/suggestions are appreciated. Thank you so much for reading along and for your support.
Respectfully,
Bill & Cathy

*** Because of the full justified formatting in most of this chapter, you may see what appears as extra spacing in places. Full justification is the way the majority of novels are formatted. ***

"The 82nd's role in the operation called for the division to fight astride the Aire River, moving north. The division captured St. Juvin on October 14, 1918, and defended it against a heavy counter-attack the following day. During its service in the Meuse-Argonne, the 82nd suffered more than 7,000 casualties." (www.blog.refactortactical.com/blog/the-82nd-division)

Phosgene is produced by passing purified carbon monoxide and chlorine gas through a bed of porous activated carbon, which serves as a catalyst. Phosgene Gas is very poisonous and was used as a chemical weapon during World War I where it was responsible for 85,000 deaths.

"If You Were The Only Girl In The World," sung by Henry Burr -


© Copyright 2020. Tootie All rights reserved.
Tootie has granted FanStory.com, its affiliates and its syndicates non-exclusive rights to display this work.

Advertise With Us
If there's no God...
A poem.

Pays: 8 points. and 1.08 member dollars
Copyright © 2000 - 2020 FanStory.com. All rights reserved. Terms under which this service is provided to you. Our privacy statement.
top
You Have No Rank
Share 4 posts to be ranked.