An Eye for an Eye by Mistydawn

I put my dreams on hold for many years after tragedy struck our family, I realized that no one is promised tomorrow. If I put off my dreams much longer that's all they'll ever be.
So I pound away at keyboard day after day, hoping to make - more...

She is an accomplished novelist and is currently at the #12 spot on the rankings.

She is also an active reviewer and is holding the #62 spot on the top ranked reviewer list.

Manny faces his own demise.

A chapter in the book Nowhere to Hide

An Eye for an Eye 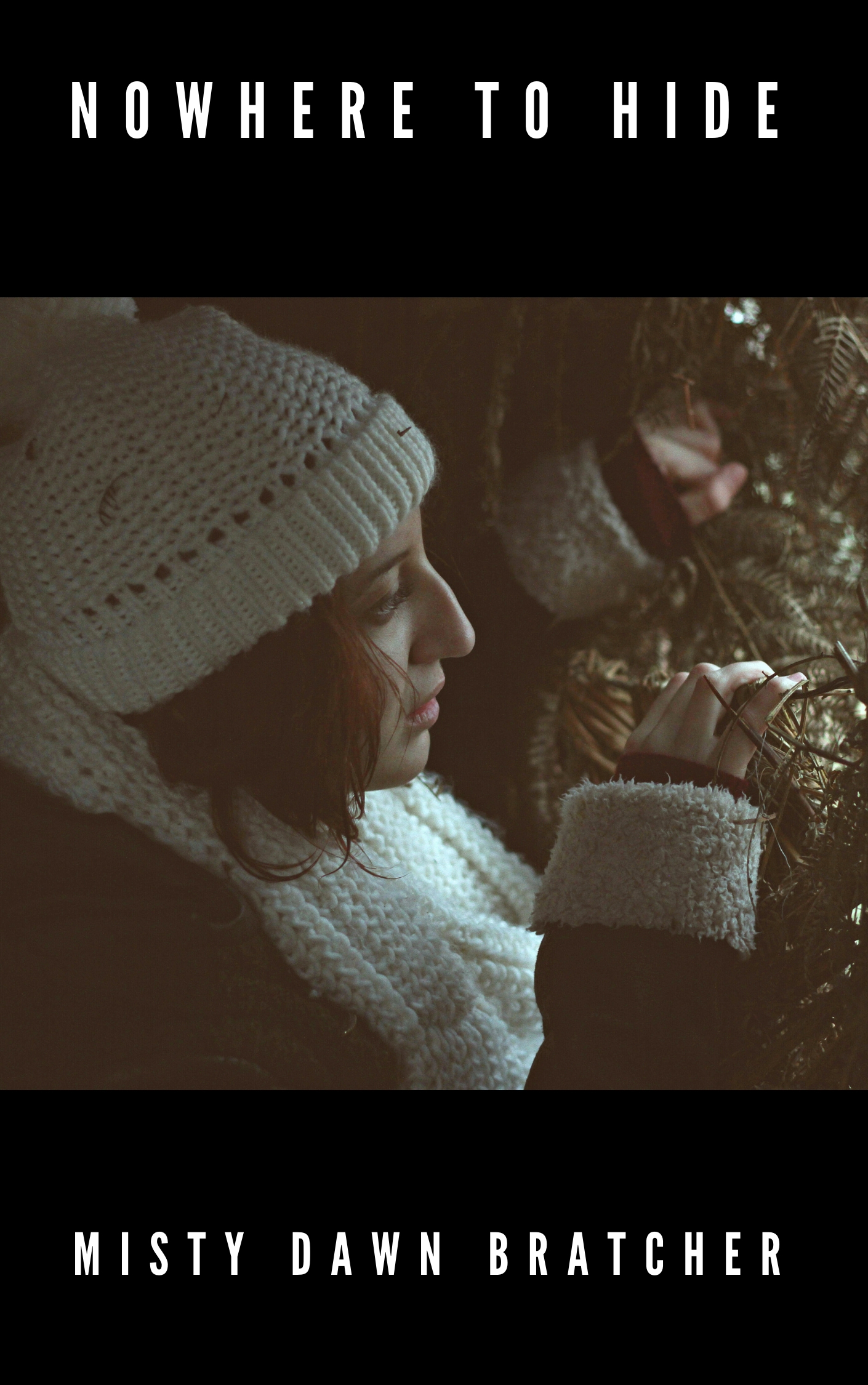 After her arrest, Elizabeth Muller decides to start a new life, under the fictitious name, Abby Miller. Everything is going great until she stumbles onto incriminating evidence against the mob.
Antonio breaks into her home, hoping to retrieve the information. She flees from him and the law.
Involved in a collision, Elizabeth is taken to the hospital where she's nearly poisoned by Manny, one of Romero's associates. Antonio is caught trying to escape. Manny has an unwanted visitor at his door.
You'll find a complete character list at the bottom of the page.
*** Indicates a new scene, a new scenario

The intruder pounds relentlessly on the decaying barrier. The flimsy wood cracks from the force. "Either open this door or we'll break it down," the voice warns from the dusty hallway. Filthy, mint-green paint flakes off the cement walls. The walkway's faded carpet is a forest green with gold swirls. A large dusty window sits on the left side of them. More apartments are scattered down the hall on their right.

Manny stands frozen in the middle of his one bedroom apartment. His body trembles, his heart races in his chest.

"I'm not telling you again."

There's a loud thud. Manny turns to find the barrier crack down the center. It's not going to hold them for long. He runs to the window and sees Esposito's man scurrying up the fire escape. I have to make a break for it, but how? Beads of sweat pop out across his forehead. His heart pounds hard in his chest like it's trying to break free. Adrenaline courses through his body. His heart rate increases. His breathing is quick and shallow. Manny jogs in place not sure which way he should go.

The door slams against the wall, knocking his only picture to the floor. Manny spins around to find a short, rounded Italian stomping through the entryway. Two burly goons fall in on either side. The three raise their guns and takes a shooter's stance.

"Mr. Esposito, sir." Manny gulps. He glances out the window to find two men on his fire escape both heavily armed. There's no way I'm getting out of this alive. Manny looks back at his intruders. His body trembles, his throat constricts making it difficult to breathe. Tears form in his eyes. His stomach tightens into a large hard knot. I'm a dead man for sure.

Esposito tromps across the floor. "No one cheats me and gets away with it." Lifting his weapon, he points it at Manny's head.

Esposito cocks his weapon. "You had your chance long ago."

"P... Please don't do this." Manny begs. Tears stream down his cheeks. He takes a step back and stumbles over the object behind him. He lands with a thud on the floor.

The burly Itilian glances at the object. "I see how you were going to make it right." Esposito knocks the suitcase away with his foot."

Leaning over, Esposito pushes the piece against Manny's head. Raising his eyebrows, he says, "So, pay up."

"You better not be lying to me, boy."

There's stirring in the hallway. Then a deep smoky voice yells, "Tulsa PD, drop your weapons. Do it now."

***
The two Tulsa detectives and a member of hospital security are viewing security footage taken from the hallway. They're hoping to get an idea as to what had taken place. Several monitors run the full length of the teal wall. A stainless steel table in front of them. A chocolate colored rug covers the floor.

"Who's that?" The officer moves his toffy colored chair closer and then points to the screen.

The technician pauses the tape. "He' one of our surgeons, sir."

"The chief of surgery will be able to tell you." The tech prints a screenshot of the mystery guest and then hands it to the second officer.

The detective looks it over. He nods and then heads out the door.

The first detective turns towards the monitor. "Let's see what else we can find."

The tech hits a button. The tape resumes.

The detective glances at the video's timestamp when the visitor leaves. Just enough time to inject her. "Who's that?"

The security guard pauses the tape again. "Her nurse, detective."

"I'll see if I can find her." Unfolding his arms, the administrator, a , gray haired gentleman steps out of the room.

"Explain to me what's happening," The officer watches the staff dart into her room.

"Betty must've called a code." A few more nurses run in. Everyone leaves a few minutes later. They see the security officers arrive on scene.

The second detective steps into the room. "I asked the chief surgeon who the guy is, and he has no idea. So, I ran the picture through software recognition, and it came back to Manny Abele."

"We need to let the captain know."

"It's already done."
***
Seeing his two officers step into the station, Mac Mc Garvey, Captain of the Tulsa PD, rushes to their side. He's a medium built man, but what he lacks for in size he makes up for with his Irish temper.

Harry glances over at his partner. "You didn't screw up the report again, did you, Bill?"

"Of course not." He smiles.

Harry looks back to find the captain a few feet away. He gulps. He's been on the wrong end of his temper more than once. "Why is he running toward us, then?"

Bill runs his fingers through his thick, black hair.  Unlike his boss's fair skin and hazel eyes, Bill is dark skinned with muddy eyes. "Maybe he wants to congratulate us?"

Harry's forehead creases, his eyebrows raise. "For what?"

Bill shrugs. "Damned if I know."

"I need to talk to you about the arrest you made last night," the captain begins stepping in front of them.

Fire shoots from Harry's eyes as he gives his partner a dagger stare.

Seeing the look, the captain quickly explains. "It's nothing bad, guys. I just wanted to tell you that the guy you brought in is willing to plea bargain."

"My plan worked." Bill straightens his posture. A smile spreads across his face.

The captain glances at Harry and then at Bill. He raises his eyebrows and asks, "I know I'll probably regret this, but what plan are you talking about, Bill?"

"I told him the two pages of charges Berryville has against him will send him away for a very long time. I happened to mention a few other things too." He recalls their conversation and smiles.

"How a pretty boy like him will be popular in prison and how he needs Big Bubba to protect him, since Dominicans don't do well on their own."

The captain scratches his copper hair. "You didn't rough him up in your little scare tactic, did you?"

"Of course not, sir. We just had a nice long chat. Well, I chatted, he listened." Bill chuckles.

"Since you did so well with him, I'm thinking you'll want to arrest his partner too?"

"He and his sidekick Manny Abele are believed to be connected to the mob. Here's the address." He hands them a piece of paper.

A dispatcher steps up beside them. "Captain, detectives, I thought you should know that a neighbor reported gunshots at the address you inquired about."

The captain spins towards the man. "Is anyone injured?"

"An officer and the shooter are being transported to the hospital. Both are in critical condition. Manny Abele and two unknowns got away."

He turns toward his detectives. "Harry, I want you to notify all public transportation to be on the lookout. Bill, I want you to pull all the security footage in the area and have patrol canvas the neighborhood."


© Copyright 2020. Mistydawn All rights reserved.
Mistydawn has granted FanStory.com, its affiliates and its syndicates non-exclusive rights to display this work.

Pays: 10 points. and 1.00 member dollars
Copyright © 2000 - 2020 FanStory.com. All rights reserved. Terms under which this service is provided to you. Our privacy statement.
top
You Have No Rank
Share 4 posts to be ranked.