In The Folds Of Ol' Glory!

In The Folds Of Ol' Glory!


Dedicated to my fellow Commandos! 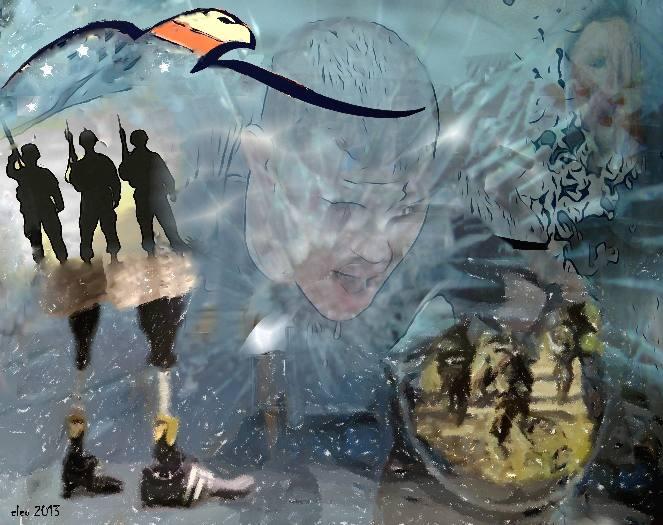 In The Folds Of Ol' Glory!
*A True Story*

Special Note:
Wider spaces between words are due to the use of "fully justified formatting."


put up a strong resistance for a short period, then melted away into the civilian population. Baghdad fell on April 9th, ending Saddam's 24-year rule.
By the fall, armed Iraqi Groups, later called ISIS, began using typical guerrilla tactics for successfully attacking U.S. helicopters with SA-7, Russian-made missiles. An insurgent guerrilla commander once gloated about the war indicating "The Americans are taking the bait and will fall into our trap!"
*******
Terrified by the missiles that were exploding on our position, I screamed, "Dig in, Commandos! The guerrillas are firing from the woods to our north." A near miss stitched my groin with fragments of shrapnel, thus knocking me on my butt. The pain hurt like when Grandma busted my tail with her broom when I was a kid. My eyes were becoming blurry, and I was feeling faint from the loss of blood. "Please! I'm too young to die, God!" I cried. Closing my eyes, I waited for the inevitable. Suddenly my vision cleared, and I felt vigorously alive. Journeying back to the begining of it all, I found myself in the doctor's office undergoing a psychological evaluation.
*******
"In your professional opinion, Doctor Miller, is John mentally alert and qualified for the "Joint Services Commando Training?"
"Did you say mentally alert, Colonel Rose? Professionally speaking, John's overly theatrical in character and crazy as a loon. For example, when I asked if he sometimes had the urge to kiss a man, he replied, 'Yes, Doctor; yet, let's wait until after dark so no one will see us!' Now, please get him out of my office before he aimlessly scribbles away my inkblot tests."
"John, report to my office!"
"You betcha, Colonel Rose! However, I want to thank Doctor Miller first, okay?"
"Thank me for what, John?"

"For understanding my Smoky Mountain jibber-jabber and offending you about the inkblot tests."

"Forget it, because some things are better off left alone!"

"But, Doctor, I only scribbled on the inkblot tests because I was bored stiff with your evaluation--sorry!"

"Enough of your bull-poop! Now, get outta my office on the double!"

"You wanted to see me, Colonel?"

"Leaving Doctor Miller in full control of his faculties."

"You're welcome. Of course, you know that he's a religious man, don't ya?"

"What makes you say that, John?"

"Do something for me, John."

"Try talking with the guerrillas before shooting 'em, because I bet ya they surrender to maintain their sanity. Now, get along to commando school and Godspeed."

"So long, Colonel, and thanks for the ride--a SALUTE!"
*******
The next three years of my life were the longest ever. There were Joint Service Schools with an expertise in most everything, with exception of brewing moonshine liquor. Were the schools hard? You betcha! Somehow, I graduated from them all and became the first Air Force Leader of an Elite Special Forces Commando Team. The years ahead were to change my life forever.
*******
"Listen up commandos, we have a 2:00 a.m. drop-off time. So, synchronize your watches and let's get ready to kick butt."

Having said that, we loaded up, cinched our seatbelts and waited for Captain Hill to haul buggy.

"What's a'mater, Captain? Did you lose the instruction book on how to fly this blackhawk helicopter?"

"No, John; yet, I must of lost my mind when I accepted the assignment to fly you boy scouts into battle."

"Yes, Sir. Now get this eggbeater to the drop-off site quick."

“Because these idiots are tying knots in our cargo nets."

Once hearing that, Hill slammed the engine throttle forward, then lifted the chopper straight up to around 600 feet in less than six seconds. Amazingly, no one lost his breakfast. Upon reaching an altitude of 2000 feet, he switched the infra-red sensor and night vision switches on, the navigational lights off, throttled back to around 260 mph and then headed north. Glancing at my watch, I saw the time was 1:30 a.m. and only thirty minutes to drop-off time. Reflecting back through the three years of our elite training for the mission ahead, I certainly hoped that it was better than that of our enemy.

"We're ten minutes out, commandos. Stay buckled up until you hear from me, then haul you’re butts down the ladder."

"Don't get so irate about the cargo nets, Captain, 'cause, Roy cut the knots out."

"Of course. That's a prerequisite for commando training."

Hopkins laughed, shook his head and then remarked, "Last Sunday in church, I prayed that I'd be sick today and unable to fly; yet, God works in strange ways."

"Damn! There's a missile heading straight for us,” yelled Hill.  “Quick, launch a flare to decoy it, Sergeant Hopkins."

Slamming the throttle to full power, the captain pushed the stick forward, did a power dive for approximately 1000 feet, pulled back on the stick, did a complete backward loop, then leveled off. The missile impacted the flare and exploded.

"Hurrah! I knew it would miss us--goody, goody!"

"Cause I brought along my rabbit's foot, John."

"Then take it out and kiss it."

Once again, Hill throttled to full power, dropping from around 2,000 to 100 feet in less than ten seconds.

"You're plumb crazy, Captain. You could have aced the shrink’s evaluation and become a commando somebody rather than a chopper pilot with a theatrical complex. When we get home, I’m gonna ask your wife to give you a chill pill.”

"Thanks for the assessment, John. Did anyone ever tell you that you’re a tattletale? Now, get outta the chopper and good luck, hero."
Quickly scaling the ladder, we dropped among the body parts. How ironic that we and the guerrillas had arrived at the same time. Suddenly, a number of bright flashes, followed by an earth-shaking boom, sent chills up my spine. Six mortar rounds fell short, however, one impacted the ground dead center on our position; yet did not explode. Mark immediately threw himself upon the grenade, then yelled, "Leave the football alone, ‘cause I’m gonna score the touchdown, Brothers." A moment later, the grenade exploded. Quickly moving to his aid, I saw a gaping hole in his stomach and blood and guts everywhere. Sitting down, I held his head in my lap.

"Because I was feeling guilty."

"For kissing your girlfriend in school when you were taking a pee. My boots--get ‘em off, John!"

"They're off; want the morphine?"

"Of course! I remember, as well, you're catching my shell cracker from the Mill Pond! It was a whopper, huh?”

Mark looked up, smiled, then slowly closed his eyes.

"Why, God? Why was Mark closer to the grenade than me? I'm so angry with you! We were joined at the hip and you knew it!"

I personally arranged for Mark's funeral in Arlington. When TAPS was sounded, Ol' Glory was presented to Mark's widow, who in turn, passed it on to their son, Bobby. I recommended a Silver Star be awarded for his bravery, above and beyond. Within a month, the Secretary of the Air Force presented it to Mark's widow. Somehow, it seemed so little for so much.

After the funeral, I headed back to the killing fields. Rat, tat, tat--kaboom, kaboom! We kept shooting until the barrels on our weapons were hot, our clips of ammo ran out, and they kept a comin' like bees to a hive.

"Give 'em the cold steel, Larry, 'cause we gotta be home for Christmas!"  I yelled.

Kaboom!  A mortar projectile exploded beside me, and the shrapnel cut into my body like Grandma's knife in a cake. As the darkness walked across my eyes, I whispered, "That's okay, God!  I'll just be an angel on the Christmas tree."

“Thanks for reading and God Bless!”

Greetings, my friends! Some of us came home on a plane; yet, others came in a box. Today, I walk through the hallowed grounds and see the headstones that mark their places. Epitaphs are chiseled row upon row. They pledged allegiance to Ol' Glory, then wrote their stories. With bonded ties and misty eyes, they said goodbye to all. Hurrah! Our heroes did not die in vain; yet, marched on to fame and immortality. Forever, be faithful to our cause, and grateful for their courage. Etch their memory in your hearts. Securing our right of choice was costly; yet, they bravely paid their parts. Walking among our HEROES, I stand "Chest out, Chin up and Tall." I raise my eyes toward Heaven, then "SALUTE," 'em all! Am I proud of them? You betcha! God smiles, touches their faces, then says, "Welcome home, My children!" Thanks for reading, best wishes and God Bless. Respectfully with Admiration.
Pays one point and 2 member cents.

Artwork by cleo85 at FanArtReview.com


© Copyright 2020. By the author. All rights reserved.
The Author has granted FanStory.com, its affiliates and its syndicates non-exclusive rights to display this work.
Advertise With Us
Special Delivery
Someone who sends special packages.